Will Russian Soldiers Freeze to Death in Ukraine? 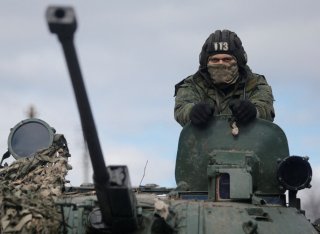 Throughout history, winter has been one of the greatest allies of the Russian people. Known as "General Winter" or "General Frost," cold harsh weather has been credited with helping defeat foreign invaders. The cold played a significant role in the Swedish invasion of 1707, the French invasion under Napoleon in 1812, the Allied intervention in Russia in 1918-19, and most notably the German invasion in 1941.

While Russian forces regularly train in cold weather, and Moscow has even increased its presence in the Arctic in recent years, reports are circulating that Russian soldiers in the forty-mile long convoy of tanks and armored vehicles moving towards Kiev could find themselves in cold metal tombs in the coming days if the engines aren't run constantly.

As fuel supplies are running low, the Russian troops could literally freeze to death as a pronounced cold snap in eastern Europe was expected to see temperatures drop to 14 Fahrenheit around Kiev and Kharkiv. Factor in the wind chill and the temperatures could feel like -4 Fahrenheit.

General Winter is now defending Ukraine, and the icy conditions are expected to make the going even slower for the convoy, which has already been stalled for days due to mechanical problems, fuel supply issues, and tough Ukrainian resistance.

Former British Army major Kevin Price told The Daily Mail that the Russian tanks will now become nothing more than “40-ton freezers” as the mercury drops, and he suggested that the bitter conditions will destroy the morale of troops not prepared for Arctic-style warfare.

The Russian soldiers may do what past invaders often did, namely, surrender.

"A metal tank is just a fridge at night if you are not running the engine," Glen Grant, a senior defense expert at the Baltic Security Foundation, told Newsweek.

"The boys won't wait, they will get out, start walking to the forest, and give themselves up to avoid freezing to death," Grant added.

The Russian troops don't seem prepared for a late winter cold snap, but unlike in 1812 or 1941, modern technology does allow for some long-range weather forecasting. There have been reports that Moscow waited until the end of the Beijing Olympic Games to launch the attack, but Russian forecasters should have expected that spring wasn't just around the corner.

As a result, Russian president Vladimir Putin has now made the same mistake as the Emperor Napoleon Bonaparte and Nazi dictator Adolf Hitler, and wrongly assumed a quick victory was in order. Instead, his troops—much like Napoleon's Grande Armée and Hitler's Wehrmacht—are suffering in the extreme cold.

In a letter to his wife, the Empress Marie Louise, explaining his defeat in Russia, Napoleon Bonaparte wrote: "The winter was our disaster. We became the victims of Russia's climate."

Putin uses history to justify his actions, including the dubious claim that Ukraine has always been one with Russia, but clearly he skipped over the parts about General Winter's role in defeating those who marched across Ukraine.