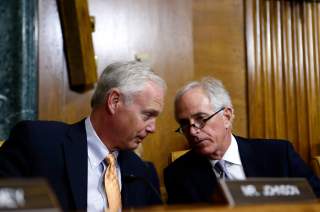 The Wisconsin lawmaker told colleagues that he would consider a probe against the former vice president who is now running for president, three people familiar with the conversations told WaPo. The report suggested other Republicans in the Senate are being more circumspect about how to approach the matter.

WaPo changed several sections of the report in a later version, stripping out sections of the article pertaining to Johnson’s comments. WaPo has not responded to the Daily Caller News Foundation’s request for comment.

“We have and will continue to gather information and conduct oversight on alleged misconduct within government agencies,” Johnson, chairman of the Homeland Security Committee, told reporters when asked about the conversation. His office directed the DCNF to the senator’s comments in WaPo.

Johnson’s reported decision comes after President Donald Trump admitted Monday that he asked Ukraine to investigate Biden, but pointed to Biden’s pressuring of Ukraine to fire a top prosecutor that was looking into his son’s business ties.

The White House released the unredacted transcript of his conversation with Ukraine’s president after Democrats pushed for impeachment, saying he threatened to withhold aid until the country launched a probe into the former vice president.

The Republican National Committee is also pressuring Biden to publicize whatever documents he has related to his work in Ukraine.

GOP Sen. Richard Burr of North Carolina, meanwhile, told fellow Republicans he would not launch a probe into Biden since it is not in his jurisdiction, WaPo reported, citing two people with knowledge of the conversations. Burr is the chairman of the Senate Intelligence Committee.

Burr’s office declined to provide a comment to the DCNF.