Will South Korea Completely Phase-Out Its F-16s to Go All in on the F-35? 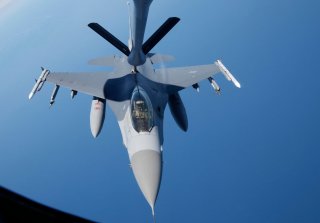 Key point: Seoul has purchased multiple F-35s. The question is if it will also get rid of older planes to make more room in the budget for future F-35 acquisitions.

The American planes would join a growing fleet of South Korean F-35s. The U.S. Air Force is already practicing employing the F-35s in a war with North Korea.

“U.S. Forces Korea is expected to deploy state-of-the-art F-35A stealth fighter jets at major air bases here in place of the current bread-and-butter F-16s,” The Chosunilbo reported. “A South Korean government spokesman on [Sept. 1, 2019] said they will be deployed from early 2020s.”

The U.S. Air Force maintains around 60 F-16s in three squadrons -- plus a squadron of around 20 A-10 attack jets -- at two Korean air bases. The Air Force also keeps two F-16 squadrons in Japan.

The planned F-35 deployment should come as no surprise. F-35s slowly are replacing F-16s in U.S. Air Force squadrons and eventually could replace A-10s, as well. By the 2030s the F-35 could be the most numerous fighter type in the Air Force inventory.

American F-35 units have begun practicing one key tactic for operations on the Korean Peninsula. On Nov. 19, 2018, two Air Force wings in Utah launched 35 F-35 stealth fighters in a short span of time.

The November 2018 group-takeoff, which the air force calls an "elephant walk," involved F-35As from the 388th and 419th Fighter Wings at Hill Air Force Base. The active-duty 388th and reserve 419th train air force F-35 pilots.

The 388th's 34th Fighter Squadron, whose F-35s have the latest Block 3F software, also has a front-line role. In late 2017, it became the first Air Force F-35 unit to deploy overseas, to Japan.

There is a reason that the 7th Air Force in South Korea and Japan have organized more elephant walks than most air force commands have done. "The threat here on the peninsula is very real, and countering that threat needs to be in the forefront of our minds," Col. William D. Betts, then-commander of the 51st Fighter Wing in South Korea, said in 2017.

In 2018 the Trump administration suspended Vigilant Ace as a concession to North Korea, hoping that Pyongyang, in turn, would suspend its nuclear-weapons program. North Korea has continued to develop its nukes.