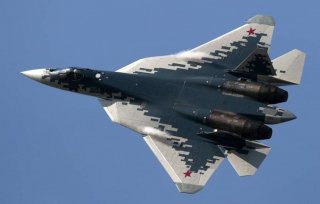 Moscow’s efforts to develop, test and procure its new Su-57 fifth-generation stealth fighter have long stalled, with numerous setbacks and delays. While progress has been made, ongoing issues appear to beleaguer aspects of this complex development process, especially following the high-profile crash of an Su-57 prototype during a test flight on December 24, 2019, in Khabarovsk region, in Russia’s Far East. Specialists in Russian airpower frequently defend the Su-57 against critics by asserting that such negative assessments are rooted in exaggerating the merits of the United States’ F-22 or F-35 stealth fighters. While Russia’s defense ministry aims to introduce 76 Su-57s by 2027, recent reporting suggests there may well be further modifications to the platform before production can finally commence (Topwar.ru, May 15).

One likely modification relates to the aircraft’s hydraulic drive, which will be replaced with an electromechanical one. The first test flight for the updated Su-57 is scheduled for 2022. The purpose for carrying out such an upgrade is to reduce future maintenance costs and increase the efficiency of the aircraft. The switch to an electromechanical drive will also offer greater protection to the booster. Yet, the economic factor—reducing the maintenance costs for the Su-57—may well be crucial, since critics within the Ministry of Defense have questioned the reasons for accelerating work on the advanced aircraft, arguing that the Aerospace Forces (Vozdushno Kosmicheskikh Sil—VKS) are currently well served by the Su-35, which has been tried and tested in operations in Syria (Lenta.ru, April 28).

Moscow-based airpower specialists note that international criticism of the Su-57 stems from the lengthy period of its development as well as unfavorable comparisons to the US F-22. One commentary offered examples of such criticism from defense publications in the United States, Italy and China. The Su-57 was dismissed as being not ready for combat against a high-technology adversary. Questions have also been raised over its engines as well as a range of factors that may present challenges to the full stealth capability of the Su-57. One report in Beijing highlighted the issue of stealth technology and concluded that the Su-57 should, therefore, be classed as a fourth-generation fighter. In 2018, India withdrew from a joint program with Russia to create a fifth-generation fighter. The Indian Air Force was dissatisfied with the Su-57’s lack of stealth, weak engines for such a platform, and the numerous delays in terms of program implementation (Topwar.ru, May 13).

While the widespread foreign criticism of the Su-57 undoubtedly causes irritation among Russia’s military experts, it seems the delays to finalizing production, combined with the most recently announced modifications, suggest there could be more serious underlying issues. On August 22, 2018, the defense ministry signed a contract for the supply of the first two Su-57s, delivered during the period 2018–2020; this year, the VKS is scheduled to receive 13 more Su-57s. It is questionable if these targets will be met, however. Since work on developing the Su-57 began in the early 2000s, serial production has been postponed several times. To date, there have been thirteen prototype Su-57s, with three reserved for ground-based testing and ten platforms for flight tests. The Su-57 crash in December 2019 was certainly a fresh setback for the Sukhoi Design Bureau, which is producing this aircraft (Gazeta.ru, April 28).

The platform will enter service equipped with the existing AL-41F1 serial engines with an axisymmetric round nozzle section. Similar power units are installed on the fourth-generation Su-35S. Su-57s with such engines will be delivered to the VKS by the mid-2020s. At a later stage, more advanced “Product-30” engines will be installed on the Su-57s. Although little technical data is publicly available regarding this newer engine, according to Russian air defense specialist Mikhail Khodarenok, there are indications it will have a flat nozzle (Topwar.ru, May 15). This may be linked to efforts to eventually twin the Su-57 to the operational use of the heavy strike, reconnaissance, unmanned combat air vehicle (UCAV) S-70 Okhotnik (Hunter), which also has a flat nozzle (see EDM, November 13, 2019).

Since Soviet physicist Petr Ufimtsev worked out the fundamentals of stealth aircraft theory in 1962, the US has become the undisputed global leader in the use and application of stealth technology. Moscow has only recently attempted to play catch-up in this field. In essence, radar stealth is achieved by scattering incoming electromagnetic radiation or absorbing it via a protective coating. Even under the best circumstances, some part of a radar’s beamed radiation energy returns, having directly bounced off the stealth craft’s surfaces; yet, at large distances, this echo will hopefully be small enough to be perceived by the radar’s sensors/operators as nothing more than electromagnetic noise. Consequently, the smaller the distance between the radar and the “invisible” aircraft, the greater the likelihood of the plane’s detection, which has spurred the invention of special absorptive coatings to further limit how much of a signal returns to the radar receiver. The formulations of the coatings used in stealth aircraft in the US, Russia and China remain classified. Though it is known that these are polymeric materials with carbon inclusions designed to absorb wave energy (Voyenno Promyshlennyy Kuryer, May 18).

According to Vladimir Tuchkov, writing in an article for Voyenno Promyshlennyy Kuryer, “The designers of the Su-57, however, added four more decimeter radars to the four-centimeter-range radars, the antennas of which are located in the wing. This allows you to launch a rocket in the ‘target location’ so that the missile, approaching the target at a distance of capture by its radar homing, makes a targeted attack.” Tuchkov notes that as well as the stealth challenges for the Su-57, it also has to avoid detection in the visible spectrum and infrared wavelength range. To reduce optical visibility, the designers of the Su-57 added a “pixel color” on the aircraft. However, challenges remain to overcome the thermal or infrared visibility of the jet (Voyenno Promyshlennyy Kuryer, May 18).

Despite the numerous delays to the production of the Su-57, the defense ministry and the Sukhoi Design Bureau retain confidence that, in the future, Moscow will introduce a genuinely fifth-generation stealth fighter aircraft. Meanwhile, lowering the visibility of the platform to radar, optical and infrared detection will need to be finally resolved, while the upgraded engine may become a later addition.

This first appeared in the Eurasia Daily Monitor of the Jamestown Foundation. It was written by Roger McDermott.