Will Turkey Buy Russian Su-35s Instead of F-35s? 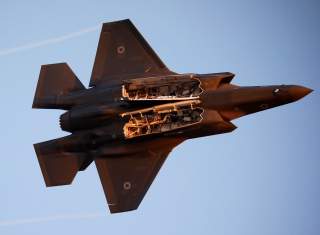 “If our Turkish colleagues express an interest, we are ready to discuss the deliveries of the Su-35," announced Sergei Chemezov, head of Russia’s state-owned Rostec arms firm, according to Russian news agency TASS.

Russia’s Sputnik News quoted an unnamed Turkish source as saying that Turkish president Recep Tayyip Erdogan would consider Russia’s offer. “It is still premature to talk about Turkey’s purchase of Russian Su-35 fighters,” the source said. “Our president will assess this important topic. He will also make a statement.”

The F-35 is a fifth-generation aircraft, like the F-22 and Russia’s Su-57. The Su-35—based on the Cold War Su-27 Flanker—is considered a 4.5-generation fighter like the U.S. F/A-18 Super Hornet, the Eurofighter Typhoon, and France’s Rafale. A formidable dogfighter propelled by two thrust-vectoring engines that can be pointed in different directions for extra maneuverability, the Su-35 is more agile than an F-35, but lacks the Lightning II’s stealth, sensors and data networking capabilities.

First deployed by the Russian Air Force in 2015, 105 Su-35s have been built, including eighty-one for Russia and twenty-four exported to China (Indonesia wants to buy another eleven). A Turkish sale would not just be a welcome boon for Russia’s sluggish economy, but a diplomatic triumph for Moscow if Turkey—NATO’s southern anchor—buys Russian jets.

A recent article in the pro-government Daily Sabah newspaper suggested that Turkey could replace the F-35 by turning to “potential foreign suppliers.” Interestingly, the article didn’t mention Russia, but did mention Turkey joining the Future Air Combat System, a Franco-German-Spanish project to develop a sixth-generation fighter (the generation after the F-22/F-35/Su-57) by 2040. Turkey is already collaborating on the Franco-German SAMP/T anti-aircraft missile project.

But incorporating a Russian fighter into the Turkish military, which uses Western equipment such as the F-16, might be difficult. There are questions of technological integration, not to mention joint exercises with other NATO members (Slovakia, a NATO nation, is planning to replace its MiG-29s).

U.S. aviation analyst Richard Aboulafia calls a Turkish Su-35 buy a “dystopian” scenario that would “represent a tipping point for Turkey on many levels. This fighter couldn’t be integrated into NATO's air defense network, and it would not be able to share data with the rest of Turkey’s military aircraft fleet. Going down this path would certainly mean a deeper rift with, and perhaps exit from, NATO.”

Another option is the TF-X, a Turkish project to develop an indigenous fifth-generation fighter. A collaboration between Turkish Aerospace Industries and British defense firm BAE, the TF-X—which looks somewhat like an F-35—is a Mach 2 fighter that is supposed to be deployed around 2025.

Turkey’s defense sector is growing, with indigenous tanks, missiles and even a combat drone. But a homegrown F-35 equivalent is a different matter. The United States, Russia and China have developed fifth-generation aircraft at enormous expense, and with results that have yet to be proven in combat. Even if Turkey can afford the project, fifth-generation aircraft like the F-35 are packages of advanced airframes, missiles, sensors and data links. Turkey does not have the capability to build all of these components, and it is unlikely to obtain all of them from overseas suppliers.

Buying Russian fighters may satisfy Turkey’s short-term need to find a replacement for its F-16s. But it doesn’t address the long-term future of Turkish airpower.