Will Zelensky’s Big Act get the Ratings? 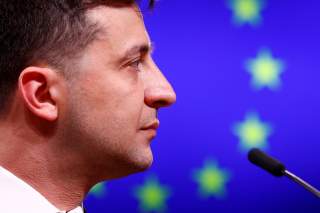 In what would be television gold, the comedian-turned-politician Volodymyr Zelensky has won a resounding plurality in the parliamentary election, allowing him and his newly founded party to begin governing Ukraine. Like his television show Servant of the People, an outsider is set to disrupt Ukraine politics. Having won the presidency in April and now securing a strong base in Ukraine’s parliament, the Verkhovna Rada, it is now time for the next season to begin. Zelensky must put on a great following act and utilize his new office to push his reformist brand to the Ukrainian public. However, it remains to be seen if the president’s showmanship can face reality, and if his government can follow through on his anti-corruption promises with substantive reforms and govern effectively.

By calling for the snap election on July 21, Zelensky has started his first term on a bold note. The outgoing parliament is dominated by Petro Poroshenko’s “European Solidarity” and other loyalist parties. The parliament plays an important role in policy implementation, as the body can constrain the president in nearly all executive decisions, including the appointment of key government officials. Exit polls show that Servant of the People obtained roughly 44 percent of the vote, which means that Zelensky is now well positioned to build a coalition. He has already stated his intent to begin talks to that effect with Holos, a political party led by the former musician Svyatoslav Vakarchuk. In reshaping the Verkhovna Rada, many traditional parties will take major losses. Poroshenko’s European Solidarity now accounts for 9 percent of the vote and former Prime Minister Yulia Tymoshenko’s Fatherland party accounts for 7.6 percent of the vote. Many other parties, including former Prime Minister Arseniy Yatsenyuk’s People’s Front and the Western-based Self Reliance party, didn’t meet the minimum 5 percent for parliamentary representation. In looking to how the president has transformed Ukrainian politics, one must look to the crowd-stirring actions that Zelensky accomplished as president.

Zelensky has sought to shape his cabinet in the same reformist image that contributed to his landslide victory. In the month since his election, Zelensky demanded that parliament dismiss the foreign minister, chief of the SBU Security Service of Ukraine, prosecutor general, and minister of defense. In attempting to recast these and other positions, the president has nominated many notable figures. Replacing Foreign Minister Pavlo Klimkin will be Vadym Prystaiko, the current deputy foreign minister of Ukraine and the head of the Mission of Ukraine to NATO; former minister of economic development and trade, Aivaras Abromavičius, who had served under Poroshenko until his protest resignation, has been appointed to sit on state defense firm Ukroboronprom’s board of directors; bolstering Zelensky’s reformist image, a former top official in the National Agency for Preventing Corruption and well known reformist, Ruslan Riaboshapka, has been nominated for chief of staff in charge of anti-corruption policy. Having assembled a lineup that will be sure to impress many within Ukraine and abroad, Servant of the People’s strong parliamentary base will now be able to confirm these appointments to serve in the Zelensky administration.

Given the president’s television experience, Zelensky knows that in addition to changing the cast, changing the set can also aid in encapsulating a major plot change. In an effort to remove symbols of opulence from his administration, Zelensky announced his intention in June to relocate the presidential administration building away from its current grandiose building to the aptly named Ukrainian House near Kiev’s Maidan square. This move mirrors a similar event in Zelensky’s show, where his character relocated to modern offices in Kyiv’s outskirts, highlighting a shift from opulence to functionality. The choice of relocating to the Ukraine House also bodes well for the president’s reformist image. The Ukrainian House became an important staging ground during the Euromaidan protests after protestors besieged the building and forced over two hundred officers to escape. Having the president move to this symbolic location will resonate with Zelensky’s pro-European audience and allow him to revive the post-Maidan fervor, something that led to radical electoral changes in 2014.

Zelensky also aims to go beyond his Euro-friendly West Ukrainian audience and present himself as a president representing all Ukraine. In contrast with his predecessor, who sought to promote a sense of Ukrainian nationalism, Zelensky has shifted course to be more inclusive of Russian-sympathetic Eastern Ukrainians. Through the promotion of the Ukrainian language and the granting autocephaly for a new Ukrainian Orthodox Church, Poroshenko had alienated many still sympathetic to Russian cultural influence. Zelensky however presented himself in a different light. While touring towns near the front, the Ukrainian president openly spoke Russian, projecting a common Ukrainian identity saying to the crowd gathered, “To be honest, it does not matter to me what language you speak, you are always Ukrainians, we all understand each other.” While not reversing Poroshenko’s language law, Zelensky has shown his intent to be seen as representative of all Ukraine. As for the church, Zelensky has seemingly dropped the promotion of the church from the state agenda, no longer promoting the conversion of Russian Orthodox Churches in the east and allowing a greater degree of religious autonomy. Unlike his predecessor, President Zelensky has presented himself to the eastern regions as a character that they can root for too.

While Zelensky has been receiving high marks from the Ukrainian public, there is still uncertainty as to whether he can follow through on his pledge to fight corruption. Despite positive signals so far, there has been little substantive policy initiatives or progress on reform. It’s worth noting that Poroshenko had also appointed many reformist characters to his cabinet when first elected, including Abromavičius, yet had done little in pursuing substantive reform policies. In addition, while Zelensky has been able to garner support among Eastern Ukrainians, his anti-corruption message is less accepted in the East because more people there are interested in ending the ongoing war in the Donbass, and while Zelensky and Russian president Vladimir Putin have agreed to continue high-level discussions over the conflict in eastern Ukraine, it seems unlikely Zelensky can keep his promise to pursue EU and NATO alignment while also appeasing Russian interests.

These are the difficult decisions that Zelensky must face. Proposing or implementing substantive policies could yield considerable backlash. Any attempt to fight corruption would be met with instant opposition from the Opposition Bloc and the entrenched oligarchs. To tackle corruption, the president would have to make difficult decisions around contentious issues such as land privatization and energy reform while engaging in difficult battles with powerful oligarchs, with any negative effects produced potentially swaying Ukrainian voters against Zelensky. While Servant of the People has a commanding plurality, implementing reforms will be difficult. In addition, Servant of the People’s meteoric rise has forced many of Ukraine’s well-known reformest figures out of office. Instead of incorporating these reformist members into his own party, Zelensky has ridden the parliament of many proven reformists in favor of his pledge for political outsiders. This preference was pursued even above ideology, with party being united only by the broad and ill-defined goals of fighting corruption and ending the war in the Donbass. Leading a coalition, let alone his own party, will prove difficult, especially since Zelensky himself is a political novice. Given this and the powerful influence of oligarchs in the opposition parties, pursuing reforms could prove perilous. Keep in mind that even as a minority, an opposition in Ukraine can be hazardous; just look to the Maidan protests to see the effects a minority can have.

This has been the show to watch leading up to the snap election. Filled with drama and flare, Zelensky has given his own political show a run for its money. While there are concerns that the symbolic moves Zelensky have made will not live up to the hype he has created, it has proved enough to win over his Ukrainian audience. It will be interesting to see what happens with a Servant of the People coalition. Will Zelensky’s “Servant of the People” be able to govern effectively, or will Ukrainians endure another five years of stagnation? What’s undeniable is that Zelensky has the support of the public. They see him as a political outsider who can represent a diverse Ukrainian constituency. With the numbers seen in the exit polls, he has been given a mandate. If he wins the plurality with the numbers expected, then he will be given a mandate. For now, Ukrainians are loving the president’s show, and perhaps soon he may convert these ratings into real political gain.

Grayson McSwain is a social media and communications intern at the Center for the National Interest.