Winning the Nuclear War? Here's the Crazy Strategy America Tried in the 1950s 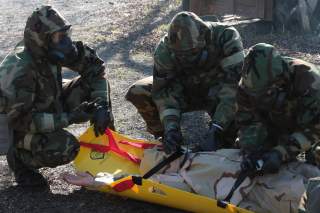 Key Point: All of these measures were necessary to enhance the credibility of America’s strategic deterrent, which ultimately prevented the civil defense plans from being needed at all.

Image: Marines from Marine Forces Reserve rescue and extract a victim from a contaminated area during a chemical, biological, radiological and nuclear defense training simulation aboard Naval Air Station Joint Reserve Base New Orleans, Feb. 5, 2015. Marines with the survey team are responsible for securing the perimeter and extracting any casualties. (U.S. Marine Corps photo by Lance Cpl. Ian Ferro)