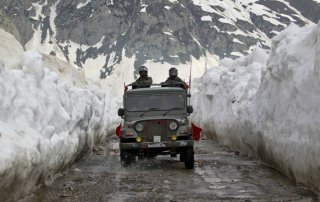 With India and China now in a prolonged faceoff along the disputed Line of Actual Control (LAC) in the Ladakh Valley, both sides are preparing for what could be a long, cold winter. Situated some 13,000 feet above sea level in the desolate Himalayan plains, the temperatures have already dropped well below zero degrees Celsius and it will only get colder. It is the world’s highest desert—so while snow may not be an issue exactly, it is simply the extreme cold that could take its toll on the soldiers on both sides of the LAC.

A dream of spring won’t come until at least next April, and even then it will be far from balmy and cold by most peoples’ standards.

Reports online have noted that China’s People’s Liberation Army (PLA) has been prioritizing its soldiers in Tibet with winter supplies and patrol gear—which is largely in contrast to the normal operating procedures that see the troops in the eastern and northern armies receiving the latest equipment first. Instead, it is now the frontline troops in western Tibet, an area often considered a backwater, who are on “the top priority” for the latest and greatest in cold weather gear.

“The new winter combat gear debuted on September 20 was tested in Tibet, and later modified and improved to suit the needs of troops operating in Tibet’s winter,” a Chinese military source told the South China Morning Post. “The frontline troops in Tibet have already been equipped with them.”

The situation is so serious that the logistics department has also been sourcing other winter gear from other army units stationed in the north of China so to ensure that the forces in Tibet are as well equipped as possible. According to the Chinese media, the new PLA winter patrol gear includes thermal hoods, winter training clothing, overcoats, moisture-absorbing and quick-drying underwear, waterproof thermal gloves and socks, as well as antiglare glasses and multifunction thermal water bottles.

The PLA units are also being equipped with prefabricated thermal shelters, which, according to Jane’s Defence Weekly and the PLA Daily, were developed by the Army Engineering University. Such facilities have been used across the Tibetan plateau and surrounding mountain regions for well over two years.

These are more than basic bivouacs, however. These include dormitories, washrooms, toilets, warehouses and of course heating equipment. It can operate in temperatures up to minus 55 degrees Celsius and maintain an indoor temperature of an almost comfortable 15 degrees Celsius (60 degrees Fahrenheit). The facilities can also be adjusted in terms of size, structure, and even interior spaces to meet the needs of the soldiers.

The Indian Army has had to deal with more logistical issues than the PLA—in part because on the Indian side of the lines there have been limited roads, while the terrain has required that nearly everything from food to fuel to lubricants can only drive up during the summer months, and must be augmented with supplies that are airlifted in. The Indian Air Force has had to ferry in equipment via heavy-lift aircraft including the C-17 Globemaster III and C-130J-30 Super Hercules.

Operating those aircraft comes at an astronomical cost, however.

The Indian Army has also been bringing in arctic tents that can accommodate three to five soldiers, along with other pre-fabricated insulated huts, which have been sourced locally. Unlike the Chinese versions that feature large generators, the habitats used by India are equipped with kerosene-fuelled heaters.

As with the PLA, the Indian Army is making the LAC an absolute priority and, according to reports from The Wire, high altitude clothing and mountaineering equipment are being purchased and shipped from Europe—again at astronomical costs. Additionally, previously worn but serviceable clothing from other formations are being passed to the units near the LAC.

On both sides, water could be in short supply, in part because the rivers and tributaries have frozen up, and little snow falls on the desert plains. What little water is in the desolate region is largely brackish and undrinkable.

Where both sides could be best prepared is in the armored vehicles. India has reportedly deployed numerous T-72 and T-80 tanks, along with BMP-2 armored personnel carriers (APCs) that can run on a special fuel mix designed specifically for the high altitudes and low temperatures. China meanwhile has deployed its specially designed T-15 light tank and T-99 main battle tank to the region.

For now, both sides are digging in and preparing for a long winter. The cold and boredom may be the greatest threat on each side of the LAC.