Without Globalization, There Would Be No Thanksgiving 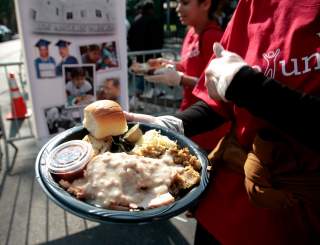 As Americans sit down to their Thanksgiving Day feasts, some may recall the story of the “Pilgrim Fathers” who founded one of the first English settlements in North America in 1620, at what is today the town of Plymouth, Massachusetts.

The history we know is one of English settlers seeking religious freedom in a New World but instead finding “a hideous and desolate wilderness, full of wilde beasts and wilde men.”

What many Americans don’t realize, however, is that the story of those early settlers’ struggle, which culminated in what we remember today as the first Thanksgiving feast, is also a tale of globalization, many centuries before the word was even coined.

Crossing the Atlantic began a century before the Pilgrims’ passage to the New World aboard the Mayflower. By the 1600s, trans-Atlantic travel had became increasingly common. It was because of globalization that those first settlers were able to survive in an inhospitable and unforgiving land. And the turkey on Thanksgiving tables may not be a bird native to the U.S. but is more likely a (re)import from Europe.

Two short stories will help me explain. As a professor of international business at Rutgers University, I have been fascinated by the history of trade going back millennia, and how most Americans do not know the background story of Thanksgiving Day.

Most Americans probably do not realize that the turkey they devour every Thanksgiving is not actually native to North America (nor is it from Turkey, for that matter). In fact, its origin is a breed of Mexican fowl (meleagris Mexicana) that the Spanish found in their Aztec colonies and exported to Europe a century before the founding of Plymouth.

Europeans confused this bird with the guinea hen (an African fowl) that had been imported via Ottoman Turkey. Apparently the taste – and the agricultural economics – of the Mexican bird were superior, and so it displaced its African kin on European farms and tables, taking over the name “turkey.” By 1530, this bird was abundant on European and British farms.

The early American colonists, who grew up eating this “turkey” in Europe, found similar-looking birds in their new environs, a North American wild version known as meleagris Americana. But these wild birds didn’t take well to being domesticated – whereas the Mexican variety had already been bred for eating in Europe and was reimported back to the North American continent under the name “turkey.”

While the first Thanksgiving meal probably involved a variety of local birds, it is most likely that what Americans know today as turkey is a descendant, in fact, of this Mexican bird, which made a round trip from Mexico back to Plymouth via Europe, on English and Spanish ships.

Squanto and the survival of Plymouth Colony

Nine months after their arrival, roughly half of the 102 settlers who disembarked from the Mayflower had perished of hunger and disease.

The utterly unprepared and amateurish Pilgrims had arrived too late in the autumn of 1620 to plant crops and underestimated the severity of the New England winter. To their surprise, they found their initial landing spot – near the Cape Cod peninsula – unpopulated, so no local advice was available.

How they survived – and what happened after that – is another example of the strange twists of globalization.

The Pilgrims reached Plymouth a month after their arrival and found that most of the local Native American population that had lived in the Cape Cod area had been wiped out in previous years by smallpox and other diseases introduced by English trading ships. One of these ships, back in 1608, proposed to the natives an exchange of English metal goods for beaver and other animal skins. Instead, they double-crossed the natives, capturing and transporting some of them back to Europe as slaves.

One of them was a young man named Tisquantum (later shortened to Squanto), who was sold as a slave to Spanish Catholic priests for £20. They freed him in 1612, and Squanto traveled to England and lived in London for six years, with what must have been a wild hope of returning to his native village. In fact, it was not so improbable an aspiration because trade and globalization were by then well-established.

Each year English trading ships would travel to New England, where they exchanged goods and would occasionally enslave more natives. In fact, the English trade with the early New England colonies was, from the beginning, linked to slavery. By 1618, Squanto’s English language abilities, general intelligence and language acumen were noticed by an English ship captain who offered to take him back to New England in return for his translation and intermediary skills. Landing somewhere near Maine, Squanto was either freed or escaped. It took Squanto three years to walk his way south and find the colonists near his native village.

In the spring of 1621, as despair and death engulfed the weakened remaining English settlers, to their utter amazement, a Native American (of the local Patuxet tribe) who spoke English as well as the area’s Wampanoag language stepped into their settlement, offering friendship and advice on what crops to plant and how to hunt and trap animals. That enabled the amateurish settlers to survive.

More importantly, Squanto served as an ambassador to the area’s Narragansett and Wampanoag Indians. And so later that year, after the first successful harvest, the Pilgrims organized a celebratory feast with some of the natives, something now remembered as America’s “first Thanksgiving.”

And for a remarkable half-century, there was an uneasy peace between the English and the natives. As a result, those 50 or so settlers who survived that first winter endured. New arrivals helped the English colony grow to a population of 180 by 1624 and eventually to more than 1,500 by 1650.

By 1675, the English population soared to more than 22,000, and the natives began to realize that they were a threat to their own lands. The natives launched an attack under Chief Metacom in what has sometimes been described as the First Indian War. The locals were no match for the English’s guns and growing numbers.

That, however, is another story.

A celebration of globalization

Squanto’s trans-Atlantic journeys, his role in supporting the English bridgehead on the American continent and the export and reimportation of the Mexican bird known as the turkey are vivid examples that globalization was commonplace, even routine, by the 17th century.

Four centuries later, as many try to push back against globalization, these stories serve as a reminder that the forces driving it cannot be stopped for long.

Meanwhile, let us give thanks for the Mexican turkeys, potatoes originally from Peru, wine from French stock transplanted to California and apples originally from Europe that will adorn our tables on Thanksgiving because of the powerful winds of globalization.