Women Arrested for Coughing on $35,000 Worth of Food 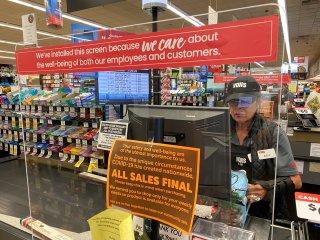 Prosecutions of people endangering others over the coronavirus are getting both more serious and more outrageous.

In Luzerne County, Pennsylvania, a woman has been arrested after coughing on and contaminating at least $35,000 worth of foodstuffs in a local grocery store.

On the afternoon of March 25, Margert Cirko entered a Gerrity’s Supermarket location and, claiming to have the coronavirus, began to “purposely cough on our fresh produce, and a small section of our bakery, meat case, and grocery,” wrote Gerrity’s co-founder Joe Fasula in a Facebook post.

According to Fasula, his employees reacted immediately and “did the best they could to get the woman out of the store as fast as possible.” The official police report says, “Cirko continued this behavior in several aisles before attempting to steal a 12-pack of beer as she was being ordered to leave the store by employees.” Authorities picked her up several hours later.

While Fasula says she was acting out “a very twisted prank,” Cirko is known to local police as a chronic problem and has a criminal record. She is undergoing both a psychological evaluation and is being tested for the coronavirus. She is expected to appear in court on April 8.

Cirko was charged with multiple felonies, including criminal mischief, the use of terroristic threats, and the threat of using a “biological agent.” These charges are in line with new Justice Department recommendations, as originally reported by Politico. “Threats or attempts to use COVID-19 [coronavirus] as a weapon against Americans will not be tolerated,” the DOJ memo read. Originally a precautionary warning, it will now go into use.

Neither was Cirko the first to be arrested on such charges. In both New Jersey and Missouri men were arrested for making threats related to the coronavirus, one after coughing on a grocery store employee and the other after licking sticks of deodorant in a store.

Gerrity’s Supermarket worked immediately to repair the situation. “Working closely with the Hanover Township health inspector, we identified every area that she [Cirko] was in, we disposed of the product and thoroughly cleaned and disinfected everything,” said Fasula, who estimates the cost of the ruined groceries to be over $35,000. The supermarket will attempt to collect damages from their insurance.

“I am also absolutely sick to my stomach about the loss of food. While it is always a shame when food is wasted, in these times when so many people are worried about the security of our food supply, it is even more disturbing,” Fasula wrote on Facebook. “One thing is for sure, we will have the cleanest display and freshest produce anywhere in northeast PA.”