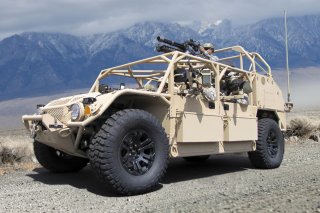 The General Dynamics Flyer doesn’t take to the sky, but it can go over almost all-terrain on the ground.

Introduced in 2013, the Flyer was developed to fill a need for special operations forces—offering a unique modular, Internal Air Transport (IAT) compliant, military-grade, mission-ready ground vehicle. It was built with speed as well as mobility and maneuverability in mind, and it allows operators to access previously denied terrain in the most demanding environments. The tubular, lightweight modular base can also offer reconfigurable gun mounts, scalable seating and flexible payload. The weapons turret can be mounted with a variety of weapons including small-caliber to 40-millimeter grenade launchers and provide 360-degree coverage for use in light assault operations.

The U.S. military has used rugged, off-terrain vehicles since even before World War II, but after operations in Afghanistan, it was determined that the current generation of vehicles lacked the ability to traverse truly rugged terrain. General Dynamics was among the companies that sought to provide a solution for the U.S. Army’s Ultra Light Combat Vehicle (ULCV) program, which has since been re-designated as the Army Ground Mobility Vehicle (AGMV) and Light Reconnaissance Vehicle (LRV).

Developed specifically with special operations forces in mind, the Flyer can operate at high speeds including off-road and in all-weather conditions. It can be configured for a variety of missions including reconnaissance, communications, light strike and personnel rescue and recovery.

In addition to offering a modular platform, General Dynamics also created two versions of the vehicle, which include the Flyer 60 and the Flyer 72. It is important to note that both are based on the same modular chassis, while the commonality between the two-vehicle designs further provides for similar training, maintenance and common inventory. In addition, sustainment costs have been also been substantially reduced by the extensive use of common components across the platforms.

The Flyer 60 can tackle rugged terrain, but it is small and compact enough that it can be airdropped to the remotest parts of the globe. It was designed specifically to fit within a V-22 Osprey and yet it still maintains a 1:1 ratio of payload to vehicle weapon. The purpose-built, military-grade vehicle seats four and can carry payload up to 4,100 pounds; it has a cruising range of 425 miles; a top speed of 70 miles per hour and it can negotiate gradients up to sixty percent and has a fording depth of thirty inches.

In addition to the V-22 Osprey, the Flyer 60 can also be transported in the CH-53E Super Stallion, CH-47D Chinook, C-130 Hercules, C-5 Galaxy and C-17 Globemaster; or externally transported by a UH-60L Black Hawk.

The Special Forces Flyer 72 is a supersized variant of the vehicle, and it offers flexible crew seating that can be reconfigured for three to nine operators. It has a top speed of 95 miles per hour and has a cruising range of 300 miles at mission profile across rough terrain, or 500 miles on flat ground at a traveling speed to 40 miles per hour. It is also fully compliant with C/MH-47 internal/sling transport and C-130 Low Velocity Air Drops.

Both versions of the Flyer platform can be integrated with a robust command, control, communications, computers, intelligence, surveillance and reconnaissance (C4ISR) solution. This can ensure special operates are never out of touch, even in most remote locations. In this way, General Dynamics has provided a true “Radio Flyer” for the twenty-first century.