The World’s Largest Submarine Is Russian—and Has Nuclear Torpedoes 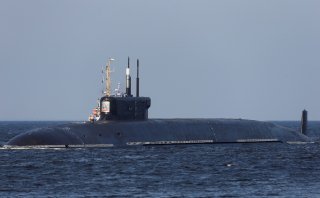 A press release by the shipyard that built the submarine stated the following: “In a solemn atmosphere, in the presence of the leadership of the Ministry of Defense of the Russian Federation, the Navy, the administrations of the Arkhangelsk region, the city of Severodvinsk, representatives of the shipbuilding industry, an acceptance certificate was signed.”

At the St. Andrew’s flag-raising ceremony, commander-in-chief of the Navy Nikolai Evmenov emphasized: “Today is a significant day for us - the signing of the acceptance certificate for the Belgorod research submarine and its transfer to the fleet. When creating the ship, advanced achievements of science and the latest construction technologies were applied using the existing technical reserve.”

Evmenov also praised the submarine's scientific capabilities, saying “the submarine ‘Belgorod’ opens up new opportunities for Russia in conducting various studies, allows conducting diverse scientific expeditions and rescue operations in the most remote areas of the World Ocean. This is the result of the selfless work of the shipbuilders of JSC ‘PO Sevmash,’ engineers and designers of JSC Central Design Bureau MT ‘Rubin,’ specialists of the Navy, workers of allied enterprises from all over Russia. The overall task of building the Belgorod submarine has been completed. I wish the crew a successful voyage and seven feet under the keel!”

Still, the shadowy submarine’s real purpose is as a kind of retaliatory, last-strike platform in the event of nuclear war—thanks to the sub’s ultra-long-range nuclear torpedoes. The weapons sound almost like something out of a science fiction film but are indeed in service with the Russian Navy, known there as 2M39 Status-6 or “Poseidon” in the West. The intercontinental torpedoes—a kind of retaliatory doom’s day weapon—can hit coastal targets.

Obvious targets for Russia would be practically anywhere along the east coast, places that large numbers of Americans call home. “This is a new page in the history of the enterprise, it is both an honor and a responsibility. Thanks to the coherence of the team's work, such accomplishments become possible,” said Vladimir Korolev in the shipyard statement. He added that “the World Ocean is, in fact, the last frontier on our planet that has not yet been fully mastered by mankind. The entry into the Navy of this submarine opens up new opportunities.”

There will certainly be new opportunities to fight a nuclear war from deep down in the ocean.