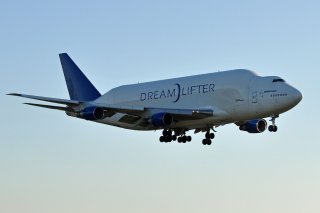 The Dreamlifter is Boeing’s largest bulky cargo freighter, and is used exclusively for Boeing’s 787 Dreamliner supply chain, where the Dreamlifter transports 787 wings and other components inside its enormous cargo hold.

The 787 is ultimately assembled on the United State’s West Coast, but sources parts internationally, from Japan and Italy, and several other countries.

As I previously wrote, transporting bulky items can be done by rail or by boat when possible. Such modes of freight transportation are costly and time-consuming. Boat freight is susceptible to weather and cannot always be relied upon. The 787 is a good case in point of shipping bulky items.

The Wall Street Journal elaborated on Boeing’s manufacturing chain problems, “the Dreamliner’s 43-foot-long nose section, for example, to be built in Wichita, Kan., is too tall to travel by rail to Boeing’s final assembly plant in Everett, Wash.”

Shipping by boat is also not a viable option. “Boeing could truck it 130 miles to Tulsa, Okla., for a barge ride down the Arkansas River. But 17 locks lie between there and New Orleans and the open sea. After that, the trip through the Panama Canal and up the entire West Coast would require up to 45 days of transit time.”

The Dreamlifter is a modified 747-400 freight plane, itself a cargo plane with a nose-loading capability. Like its predecessor, the Pregnant Guppy, the Dreamlifter is loaded from the rear. Its tail section swings outwards on giant hinges, much like a door does.

Ultimately, four airframes were built. Boeing bought the four 747-400 airframes from several commercial airlines. Two were previously in service with China Airlines, one with Air China, and one with Malaysia Airlines.

The fuselage height was increased by nearly 14 feet, giving the Dreamlifter its “I’m about to explode” look.

Since the Dreamlifter is primarily used for transporting aircraft parts, its cargo area is unpressurized. Maximum cargo weight is approximately 125 tons—significantly higher than the Airbus’ Beluga lifter, Boeing’s main competitor.

Boeing’s Dreamlifter is certainly one ugly duckling, though its worth is not in looks but in its practicality. It greatly simplified the parts supply chain for the 787 Dreamliner. And if that’s not enough—it even holds a world record to boot—longest cargo loader in the world, at just over 118 feet long. Not too bad for the world’s longest—and ugliest plane.