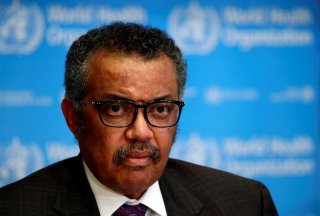 The World Health Organization is supposed to be the world’s early-warning system for pandemics, but failed spectacularly with the novel coronavirus.

In particular, the WHO took Chinese statements about COVID-19 at face value and strongly praised Beijing for its “cooperation and transparency” and for setting “a new standard for outbreak control.”

We now know that China suppressed details of the disease, punished doctors who tried to alert the public and the world, allowed Chinese citizens in Wuhan to travel abroad and spread the disease to other countries, and blocked access to WHO experts for weeks.

In response to those missteps, Trump announced that the administration is halting funding of the World Health Organization while a review is conducted to assess the WHO’s role in mismanaging the coronavirus outbreak.

If the president wants to genuinely hold the WHO accountable, counter Chinese efforts to shift blame for COVID-19, and reform the WHO to better respond to the next pandemic, he should not cut funding—at least not yet.

The reasons for this are manifold and involve practical and political concerns.

The United States is the largest funder of the World Health Organization. According to the WHO, the U.S. provided $893 million ($237 million in assessed contributions and $656 million in voluntary contributions) to the 2018-2019 WHO two-year budget through the third quarter of 2019. (Contributor data has not yet been updated to include the fourth quarter.)

That represents 15.9% of total World Health Organization contributions over that period.

As such, the threat of withholding funds is significant. But it’s also distant, because the decision to pull funding would only apply going forward. Due to its budgetary practices, the U.S. pays its assessments to the WHO at the end of the calendar year.

Moreover, because of the current crisis, the U.S. likely expedited allocation of its voluntary contributions appropriated for this year. In other words, the bite of withholding funds would not significantly affect the WHO for months.

But the costs would be immediate.

First, the U.S. will have used its biggest stick, but because the impact of a decision to withhold funds would be delayed, it wouldn’t provide the immediate pressure likely to spur the changes that the U.S. desires.

Second, while many developed countries are currently in the midst of dealing with COVID-19, the disease is just now starting to affect many developing countries.

Those countries will depend on the international community to assist them in responding to COVID-19, and an announcement that the U.S. is cutting funding to the WHO, regardless of the reality, will be interpreted as abandoning them.

The U.S. needs support from developing countries, which make up a majority of the World Health Organization membership, to approve an investigation into the WHO response to COVID-19 and adopt reforms to improve the response to a future pandemic.

How supportive are they likely to be if they think that the U.S. is cutting funding to the WHO right when they need its assistance?

Third, the U.S. has taken pains to counter Chinese disinformation and focus the world on the fact that Chinese actions and inactions facilitated the spread of COVID-19 and impeded the international response, leading to enormous loss of life and economic hardship.

It has highlighted that America provides far more funding than China does to the WHO, UNICEF, and other international organizations responding to the current crisis.

In addition, the U.S. provided $274 million in bilateral assistance to help developing countries respond to COVID-19 in late March and followed that with an additional $225 million in early April.

Those efforts will be immediately overshadowed by an announcement that the U.S. is cutting funding to the WHO even as other nations, both developed and developing, are expressing anger toward China for its role in the COVID-19 pandemic.

China would immediately exploit the announcement to expand its misinformation campaign, cement its influence in the World Health Organization, and portray the U.S. as uninterested in helping other countries deal with COVID-19.

In this instance, the threat of future withholding will be more effective than a preemptive decision. Instead of ending funding during the current crisis, the U.S. should condition future funding to specific actions by the World Health Organization. Specifically, the U.S. should demand:

The focus of the WHO should be on truly international threats to health, rather than these largely domestic health concerns that do not pose a threat to spread from one country to another.

While the other member states might not be happy with the financial threat, they will be forced to acknowledge that the U.S. did not act precipitously, but tried to work with them to reform the World Health Organization in ways that would help them as much as address U.S. concerns.

If the director-general or the WHO member states refuse to adopt these reasonable demands for accountability and reforms designed to prevent the next COVID-19, the U.S. would be fully justified in terminating funding and proposing a new international organization focused on communicable diseases and responding to international health emergencies.

This article by Brett Schaefer first appeared in The Daily Signal on April 4, 2020. It was updated to reflect President Donald Trump’s announcement about WHO funding late Tuesday.