The World is Round: Shifting Supply Chains and a Fragmented World Order 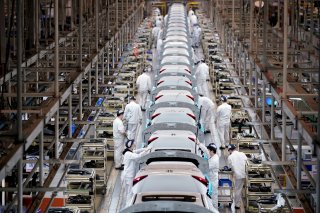 In light of global lockdown brought about by coronavirus, Thomas Friedman’s famous aphorism that “the world is flat” due to ever-increasing interconnectivity sounds anachronistic. The ever-increasing interconnectedness associated with the latest phase of globalization was believed inevitable. Since the 1990s, nationalism in the West was deemed passé as supply chains spanned the globe and international travel along with financial flows became more frequent. We thought that the digital-information age had led us to transcend nature and history respectively. These delusions were abruptly ended by the Coronavirus pandemic that has proven that the world is indeed round. Yet we are destined to repeat the mistakes of history.

The West’s economic prosperity was artificial and predicated upon an artificial standard of living by outsourcing labor to frontier and emerging markets where it was cheaper to manufacture. The rationale for our throwaway society was that it was cheaper to outsource production to areas where health or environmental regulations were poor or non-existent. As a result, we would be raising their standard of living by the service economies’ supply chains extending to impoverished production economies. As these countries’ GDP grew, we would cause them to evolve from production to service economies. We had reached a phase in history where self-interest and altruism were synonymous. Yet within the strength of this proposition lay its vulnerability. It is precisely in areas with weak regulations that makes them attractive and cost-effective to manufacture and ultimately cheaper to purchase, where there is a heightened risk for localized epidemics to become global pandemics.

Currently companies are seeking to resource their manufacturing away from China and relocate supply chains to smaller southeast Asian states such as Vietnam. Apple announced plans last year to diversify its manufacturing from being reliant upon China. Kearney, an international manufacturing consulting firm, released its seventh annual Reshoring Index that identified that in 2013, China maintained 67 percent of U.S.-bound Asian sourced goods. By the second quarter of 2019, China’s share collapsed by 56 percent, a decrease of more than a thousand basis points. Kearney predicts companies “will be compelled to go much further in rethinking their sourcing strategies, (and) their entire supply chains.”

As fostering a sense of security will be associated with controlling supply chains, there will be an increasing trend away from diversifying supply chains that have been disrupted in neighboring countries such as South Korea and Japan due to coronavirus, towards localized supply chains within national borders. The momentum is increasing as the Trump administration fearful of China weaponizing critical supply chains attempts to reduce U.S. dependence on China for drugs and medical products such as antibiotics and pain medicines used across the globe, as well as surgical masks and medical devices. In turn, the Trump administration is encouraging greater American manufacturing of pharmaceuticals, which will lead to them being more costly. This is likely to extend to industries such as semiconductors and technology. Yet the United States. will be unable to build a manufacturing base overnight. Echoing U.S. concerns, German economic affairs and energy minister Peter Altmaier has even raised the option of nationalizing strategically important companies that have suffered because of coronavirus.

The undermining of global supply chains endemic to international trade will be followed by great power contestation between the United States and China, schisms between nations, and the breakdown of multilateral projects, which in turn sets the stage for future inter-state conflict. These trends coupled with coronavirus’ disruption of global markets are likely to lead to a fragmented global order, which will detrimentally affect the export economies of Europe.

Coronavirus has already begun to undermine the legitimacy of the European project in a greater manner that nationalist movements had hoped to achieve. European finance ministers have clashed over all EU nations sharing "corona bonds" debt, while France and Germany responded to Italy’s request for ventilators with a refusal accompanied by closing their borders with Italy. At around the same time, the United States imposed a unilateral ban on commercial flights with the EU.

China’s economic growth strategy and foreign policy aspirations are being frustrated in the wake of Coronavirus, as developing countries are likely to scrutinize China’s Belt Road Initiative. Among Western policymakers anti-China sentiment is increasing. In the UK, there is mounting opposition to Huawei building its fifth-generation mobile networks. In late March, the United States abandoned its long-standing policy of maintaining a status quo vis a vis Taiwan. President Donald Trump signed into law The Taiwan Allies International Protection and Enhancement Initiative (TAIPEI) Act, which increases U.S. support for Taiwan and “alters” engagement with nations that undermine Taiwan’s security or prosperity. Beijing responded that it would respond forcefully if the law was implemented, all the while China increases its military drills around Taiwan. This is increasingly likely to occur while the United States increasingly supports Hong Kong’s independence movement and demonstrates willingness to confront China in the South China Seas. Similarly, Washington is likely to be drawn into a confrontation with North Korea as the collapse of North Korea’s health system may threaten Kim Jong-un’s regime leading him to militarily lash out.

The latest phase of globalization spearheaded by the West entailed that service economies were not responsible for the manufacture of the products they consumed. Instead, they depended upon outsourcing production of cheap goods in distant shores creating unprecedented levels of economic prosperity, which at its root was artificial. Liberal democracies did not reach “the end of history,” where conflict was to be consigned to the dustbin of history, but could easily be unraveled by a virus emanating from a society it was reliant upon that did not share its norms. In a similar vein, the Roman Empire’s apex contained the seeds of its decay as it had become overstretched and difficult to manage. The historian Edward Gibbon, in his 1776 book The Decline and Fall of the Roman Empire, notes that Romans had become weak and responded to the challenges of hyperinflation, civil wars and revolts by outsourcing their duties to defend their empire in far flung regions to “barbarian” mercenaries such as the Visigoths. Blowback occurred as these barbarians’ increased economic production and their ability to conduct warfare, which led them, ultimately, to turn against their benefactors and sack the Roman Empire. Similarly, the West increased the prosperity of faraway nations and ironically, as a result their military assertiveness by being beholden to extended global supply chains. This along with the risk of globalization unravelling increases the prospects of inter-state and great power conflict. All it took was a virus to detonate the fuse that was shorter than anyone expected.

Barak Seener is the CEO of Strategic Intelligentia and a former Middle East Fellow at the Royal United Services Institute (RUSI). He is on Twitter at @BarakSeener.