The World War II Battle For Italy Should Never Be Forgotten 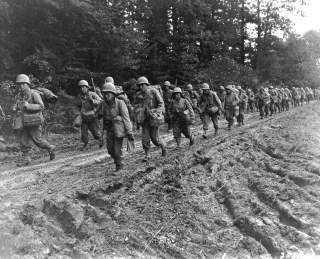 The assistant division commander, Brig. Gen. William Wilbur, realized that the entire force would be destroyed when the sun came up, gave the orders at 5:15 a.m. to return to covered positions on the U.S. side of the river to regroup. The order applied only to the men still on the U.S. side of the river. They had lost all contact with the men on the German side. They would have to blindly wait, hoping help came soon, no idea the attack had been called off.

Later that morning, II Corps Commander, Gen. Geoffrey Keyes pressed Walker to renew the attack by noon. Walker, incredulous at the irrational demand, noted that Keyes’ operations officer was carrying a clipboard with suggested attack plans Walker could use.

“Anybody can draw lines on a map,” Walker later wrote, “that doesn’t require brains nor tactical ability. But it does require knowledge, skill, discipline, and many other good qualities to figure out, in detail, with reasonable accuracy, the difficulties that lie in the way.” It was obvious that Keyes had no understanding of the profound nature of the difficulties the Germans posed.

But under the harsh conditions of war, it is almost impossible for subordinate commanders to refuse orders, even if they feel the orders are foolish; there may always be something the higher commander knows that the junior leaders don’t. Walker therefore grudgingly regrouped his men, took accounting of the troops and equipment still left, and went about the near-impossible task of formulating a new attack plan. If the Germans had been alerted to the attack on the 20th, they were now fully prepared for the second attempt on the night of 21st January.

In general terms, an attacking force should be three times larger than the defending force to have a chance. As it turned out, the Germans had a substantial superiority in numbers to the attackers. On top of every military and natural obstacle working against Walker’s troops, the Germans were well-rested, in secure bunkers, and had the dominating high ground. The second attack was doomed before it began.

The second attack started just as the first and suffered much of the same fate. German artillery and machine guns cut the troops to ribbons on the way to the river and killed many more during the crossing. The Texans continued their relentless drive and by early afternoon on January 22nd, a number of troopers made it across and joined the few who had been huddled in foxholes since the first attack.

The determination of the leaders and men under these conditions was astonishing. Despite the impossible odds, regardless of how many of their comrades has already fallen, the men of the 36th continued fighting. Col. William H. Martin, commander of the 143rd Infantry, said of this attack, that when he knew “there was no alternative but to make the attack as ordered, I made an all-out effort to succeed. My officers and men did likewise, knowing they were facing impossible odds. The heroes of the Alamo knew they could not succeed, but they fought with determination to death.” The Texans of the 1944 battle suffered much the same fate.

Too few men made it across the river and there were insufficient numbers of soldiers to press the attack to pry the Germans from their covered positions further from the river. Survival became the greatest task. Like the day before, eventually all the Americans on the far side of the river lost contact with their headquarters, they began to run out of ammunition, and their numbers continued to dwindle as the Germans destroyed all the bridges the 36th erected over the river and then methodically eliminated each isolated group. The battle had been lost.

Astonishingly, however, World War II Corps Commander Gen. Keyes was still not able to acknowledge defeat. With the virtual destruction of two infantry regiments, he initially ordered Walker to embark on a third attack. At the time Keyes issued the order on the afternoon of the 22nd, all the boats that had been made available for the operation had been destroyed. All the bridging equipment the engineers had brought were likewise destroyed.

The only fresh unit available was the 142nd Infantry, but other than manpower, they had no means to cross the river even if there had been no enemy. Only Clark—who belatedly accepted the reality of the mission’s failure—stepped in to cancel the third attack. The battle was finally over.

Out of the approximate four thousand men of the 36th Division who began the operation, more than half were killed, wounded, or captured. Those that were left were physically and emotionally devastated and unavailable for quite some time. But what had the fight accomplished for the Allied? Sometimes even a tactical defeat can result in strategic success. That’s what Clark believed.

In his memoirs published after the war, Clark said he recognized the risk but was compelled “to go ahead with the attack in order that I could draw to this front all possible German reserves in order to clear the way for SHINGLE. This was accomplished in a magnificent manner. Some blood had to be spilled on either the land or the SHINGLE front, and I greatly preferred that it be on the Rapido, where we were secure, rather than at Anzio with the sea at our back.”

The problem with his noble-sounding rhetoric, however, is that he was wrong about the impact the attack had on the Germans. It did absolutely nothing for the Allied troops at Anzio nor did it draw any German reserves away from the Liri Valley surrounding the Rapido River. Moreover, beginning just days later, the 34th Infantry Division succeeded in crossing the Rapido River and creating a beachhead on the German side—in precisely the same spot Walker had requested prior to the January debacle.

As it turned out, the troops at Anzio did not get any help from Clark’s troops until late May when they finally broke through the Liri Valley. Clark then pressed all his troops to move with all possible speed to take Rome from the Nazis, which finally occurred on June 5, 1944. If you don’t remember that date, it’s not surprising: the costly victory did little to hasten the end of the war, and the next day—June 6, 1944—Gen. Dwight D. Eisenhower’s troops landed on the beaches of Normandy and forever captured the attention of the world.

The survivors of the 36th Infantry Division, however, were not willing to fade quietly into history. In the minds of the troops that made the knowingly ill-fated attack at the Rapido, they deserved to have their story heard and justice for their loss. Less than a year after the war was over, Gen. Walker, Col. Martin, and one other veteran of the battle testified before the US House of Representatives. Their stories were gut-wrenching. Their search for justice, however, met a fate almost as disgraceful as their bitter loss in Italy.

Daniel L. Davis is a retired U.S. Army colonel who served multiple tours in Afghanistan. He is a senior fellow with Defense Priorities. Follow him on Twitter @DanielLDavis1. This article first appeared last year.