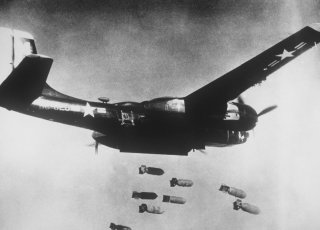 Last week residents in the quiet Oxfordshire village of Drayton in the UK were awoken to the sound of explosions. It wasn't an accident or a terrorist attack, but rather the sounds of bombs that had been dropped nearly 80 years before, during the Second War World. Experts from the Ministry of Defence and Thames Valley Police disposed of the devices safely, but this isn't always the case with the old ordnance.

This year marks the 75th anniversary of the end of the war, yet aerial bombs, land mines and even hand grenades from that deadly conflict are still finding victims.

In April 2014, a World War II bomb killed seven in Bangkok – and the tragedy, in that case, was that it was dug up by construction workers and sold to a scrap yard, where attempts to cut it open turned deadly. Even those experienced with bombs can all too quickly become victims of decades-old bombs as well.

This was the case in the German town of Goettigen in June 2010 when three experienced sappers, or combat engineers, who had more than 20 years of experienced and had defused a combined 700 bombs, were killed just before a defusing operation was set to begin on a 500kg (1,100lb) bomb.

Unexploded bombs are found with disturbing regularity in Germany even all these decades later due to the sheer number that were dropped. Many times it is now construction workers that uncover the bombs because of the nationwide building boom.

An American WWII bomb was found at Tesla's new German site outside Berlin this past January, while another American bomb was defused in Munich in 2012. Last year there had been 19 bomb alerts in a single month across Germany when exploded ordnance was found in Augsburg, Berlin, Bochum, Cologne, Dortmund, Erfurt, Essen, Freiburg im Breisgau, Halle, Hamburg, Gelsenkirchen, Münster, Stuttgart and Xanten, as well as a bomb near the Autobahn outside of Nuremberg. So common are such incidents that reporting rarely goes further than local media.

Unexploded bombs are also found across Great Britain, and while this includes sleepy villages such as Drayton, it is far more common in the larger cities, notably London, which was the target of the Blitz, which lasted from September 7, 1940 to May 11, 1941. Between 40,000 and 43,000 civilians were killed and some two million houses, or roughly 60%, were destroyed.

Few parts of the continent are sparred either – last year it was reported that there are seven to ten unexploded bombs in the ancient ruins of Pompeii outside Naples, Italy. American and British bombers didn't actively target the ancient site, but German military units had encamped on the site and as many as 165 bombs were dropped and many could still be uncovered by archeologists in the years to come.

It also isn't just the aerial bombs that present a danger. There are still countless sea and land mines that remain, presenting a serious danger on beaches along the coast. Just this month the Royal Navy minehunter HMS Grimsby completed her spring stint with a NATO task force searching for wartime ammunition off the French coast near the port of Dieppe. Eight unexploded bombs and mines were neutralized by the Faslane-class warship. Last year the NATO Historic Ordnance Operations Alliance found 2,027 "mine-like" objects, of which 148 were mines and 63 other pieces of historic ordnance.

These efforts on the beaches and in the cities of Europe will likely continue for years, possibly decades to come.