The World's Only 'Battlecrusiers' are Back (And in Russia's Navy) 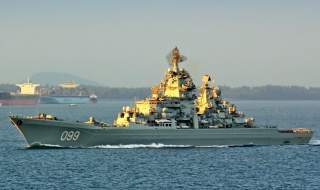 As Russia forges ahead with a far-reaching modernization program to field a leaner, smaller, and more cost-efficient fleet, the Russian Navy continues to cling on to two of the most prolific ships of the Soviet past: the Admiral Nakhimov and Petr Velikiy battlecruisers, which remain the largest and heaviest surface combatant ships in the world.

Admiral Nahkimov is currently undergoing a deep refit at the Severodvinsk shipyard in Northwestern Russia. First Deputy Prime Minister of the General Director of AO PO (a Sevmash subsidiary) Sergei Voronko told the official television channel of the Russian Defense Ministry, Zvezda, earlier this week that the battlecruiser will enter state trials by the end of 2020: "We will initiate a host of programs to float it [Nakhimov] out of its drydock in 2020. The next stage is to finish its construction on the embankments and to prepare it to enter state trials.” In keeping with the established Defense Ministry timetable, Voronko reiterated that Nakhimov will be transferred to Russia’s Pacific Fleet by 2022.

The Kirov-class battlecruiser line has its roots in a particular strain of Soviet, 1970’s Cold War-Era strategic thinking. Just as the great powers had given up on the battleship-type vessels of the first half of the 20th century due to their cost and vulnerability, Soviet high command commissioned a battlecruiser-- typically seen as a lighter and faster variant of battleship-- to counter the growing threat of US submarines. But with the rise of the U.S. carrier strike group over the ensuing decade, the Kirov-class antisubmarine cruiser project grew into a dual role: its battery of twenty P-700 Granit anti-ship missiles would threaten U.S. aircraft carriers and other large surface ships, while over a dozen SS-N-14 missiles allow Kirov-line ships to double as an anti-submarine platform. In a Cold War geopolitical context where the USSR had active military commitments across several continents, The Kirov line was meant to serve alongside a planned class of Soviet aircraft carriers as part of a new arsenal of global power projection.

This grand project to build a distinctly Soviet-style of carrier strike group collapsed along with the Soviet Union; the deeply troubled, if not moribund, Admiral Kuznetsov became the only aircraft carrier in its line, while the four Kirov-class cruisers-- Admiral Ushakov, Admiral Lazarev, Admiral Nakhimov, and Petr Velikiy-- fell into various states of disrepair over the 1990’s.

President Vladimir Putin’s defense ministry made early plans to refit all four Kirov ships, but it became clear in the following years that Ushakov and Lazarev are so decrepit and technologically outdated that their “refit” would have to be a full reconstruction. In light of the immense cost and time commitment of modernizing four battlecruisers, the Russian Navy has pragmatically decided to focus their resources on the marginally better-preserved Petr Velikiy and Admiral Ushakov. Ushakov and Lazarev, on the other hand, are reportedly scheduled to be scrapped in the early 2020’s.

For a Russian Navy that has made major strides toward a lean, local-defense modernization model centered around submarines, corvettes, and frigates, the colossal Kirov-class battlecruisers offer an intriguing form of continuity with the Soviet past. Once refitted with the formidable Kalibr/Oniks cruise missile package and a modern electronics suite, these vintage behemoths can pose a salient threat to NATO maritime assets in the Baltic region and Black Sea. No less importantly, they could fill a naval prestige role left vacant in the wake of Admiral Kuznetov’s 2018 drydock accident.