Worse Than Iraq—Or Vietnam: What War With Iran Would Look Like 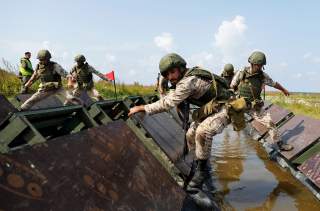 Key Point: So long as Washington and Tehran are engaged in a contest of brinkmanship, both sides should be clear-eyed about what awaits on the cliffs below.

In the wake of a rollercoaster week of escalatory and de-escalatory signaling between the United States and Iran, both sides appear to have taken a step back from the abyss. Iran’s retaliatory missile barrage did not kill any U.S. personnel and President Trump has not signaled any plans to escalate beyond the killing of General Qasem Suleimani. But the core political stakes of the contest have risen. In response to the killing, Iran sloughed off the remaining limits on its nuclear hedge. Trump reflexively tightened sanctions.

No new status quo has emerged from the latest episode that suggests the future will be more stable. Neither side may seek war, but both wish to demonstrate that they are willing to risk war over the stakes—and, most importantly, that they are willing to stomach more risk than the other. Under such circumstances, observers should brace for more of the same.

President Trump has indicated that he does not want another war in Middle East. But in the delicate dance underway of signaling intentions and resolve, neither side is in perfect control. Escalations can be miscalculated, misperceived, and accidental. The belligerents may even deliberately use such risk to communicate their resolve. In its latest attack especially, Iran embraced a certain degree of chance that its missile would kill Americans on Iraqi bases. Unless coordinated with the adversary, any attack runs some risk of casualties.

Under these circumstances, it is worth peering into the abyss. What would a war with Iran look like? In sum, it would be the gravest mistake in U.S. foreign policy since the Vietnam War. Yes, even worse than the 2003 invasion of Iraq.

Operationally, a war for regime change in Tehran will be much more complicated than the Iraq War. In the 2003 march to Baghdad, the brunt of the ground campaign was carried by one armored division and one Marine division (the 3rd Infantry Division and 1st Marine Expeditionary Force). These are very low force-to-space ratios (a comparative measurement long used by military analysts), permitted by precision air power covering their flanks in the desert.

Iranian territory is, by comparison, two-thirds larger than Iraq and Afghanistan combined and covered in both deserts and mountains. The geography is likely to provide ample cover and concealment for dug-in local forces or dispersed insurgents.

Moreover, any president who thinks military operations in Iran “would go very quickly,” should remember April 1980. In an attempt to end the Iran hostage crisis, President Jimmy Carter ordered Delta Force to fly eight helicopters into Iran and rescue the hostages. As former CIA intelligence analyst Kenneth Pollack has observed: “The plan did not survive contact with the enemy’s weather.” As a result of a sand storm, three of the eight helicopters experienced mechanical issues and one helicopter crashed into a C-130 carrying fuel. The plan was aborted, eight American special operations members died, and Carter’s presidency collapsed.

Finally, for reasons that remain puzzling, Saddam Hussein prepared his forces in 2003 for a series of delaying actions, defending crossroads, strategic points; possibly believing that they could raise the costs of the invasion higher than Washington would stomach. (He also dispersed munitions around the country, a fact that would later fuel a formidable insurgency.) But Iraqi troops were outmatched in such open maneuver ground war tactics.

Iran is unlikely to make such a mistake. Its military doctrines embrace much more asymmetric warfare tactics. In an infamous military exercise, Millennium Challenge 2002, swarms of simulated Iranian speedboats overwhelmed American carrier surface radars in the Gulf and sent 19 U.S. ships to the bottom. As Sun Tzu warned, “If you know yourself but not the enemy, for every victory gained you will also suffer a defeat.” Do not expect the adversary to fight by your rules.

If Iraq can teach any lessons at all about foreign-impose regime change it is that war does not stop when the mission is accomplished. As the late British strategist Sir Basil Lidell Hart observed: “If you concentrate exclusively on victory, with no thought for the after-effect … it is almost certain that the peace will be a bad one, containing the germs of another war.” A brutal insurgency and stability operations in Iraq last years after the invasion.

Analysts use ratios of deployed forces per thousand population to compare stability operations across time and space. The approximately 169,000 coalition forces in Iraq before the 2007 surge amounted to a ratio of 6.3 per 1,000; increasing post-surge to 7.1 per 1,000 (and that is without local forces). At 81 million, Iran’s population is more than three times the population of Iraq in 2003; and a larger population than Iraq and Afghanistan combined. Though Trump has off-the-cuff explicitly ruled out sending “a million soldiers” to Iran, he is not so far from the mark.

Geopolitically, a war with Iran would be a disastrous war of choice. They may not be friends, and their visions of regional stability may differ, but Iran and the United States share some common interests. They have tacitly cooperated to confront the Islamic State. They both stand to benefit from the free flow of oil out of the Gulf. And they both fear any resurgence of the Taliban in Afghanistan.

Overthrowing the Iranian regime is liable to instead build a ‘bridge of instability’ from the deserts of Iraq and Syria to the mountains of Afghanistan and Pakistan. If, as Lidell Hart noted, “the object of war is to obtain a better peace,” this is a world Washington does not wish to see.

So long as Washington and Tehran are engaged in a contest of brinkmanship, both sides should be clear-eyed about what awaits on the cliffs below. As Trump likes to threaten, “If Iran wants to fight, that will be the official end of Iran.” Maybe so, but he and the American people should know the costs.

Their article first appeared in January 2020. It is being republished due to reader interest.