Worth a Try: How the Navy Wanted to Cloak Its World War II Warships 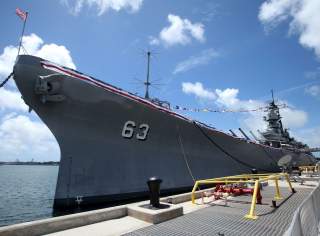 Key Point: Milititaries today have figured out how to make their hardware less visible to radar. However, that is not the same as making them invisible.

Cloaking devices are a staple of science fiction. But while a Klingon Bird-of-Prey materializing out of thin air makes for fun special effects, real-world stealth technology has mostly focused on lowering observability to radar and infrared sensors that can see further than the human eye.

This piece was originally featured in July 2018 and is being republished due to reader's interest.

However, camouflage is the original cloaking technology. During and after World War I, navies experimented with elaborate camouflage schemes intended to conceal ships on a distant horizon. Artists called “camofleurs,” including French impressionist and cubist painters, developed wildly striped dazzle camouflage. Such passive camouflage schemes delivered only mixed results, however—but during World War II a new approach suggested itself.

On a winter evening in December 1940, Professor Edmund Burr of McGill University in Montreal, Canada was observing an aircraft making a night landing through binoculars when it abruptly seemed to disappear. Burr had been assigned to study how to spot airplanes and had noted that even a black-painted plane with its running lights off could be distinguished due to its darker silhouette than the surrounding night sky. White aircraft against a white, daylight sky proved equally perceptible.

Burr realized what was happening: moonlight had reflected off fresh white snow on the ground and equalized the aircraft’s coloration with the night sky, causing it to “vanish.” To Burr, it followed that specially calibrated lights could be used to equalize the surfaces on a vehicle to blend in with the surrounding sky. Such light-adaptive “active camouflage” can be found in nature in creatures like the firefly squid.

Burr passed the concept on to the Royal Canadian Navy, which promptly fitted two corvettes with light projectors in January and May 1941. Despite teething issues, these apparently reduced detection range up to 50 percent. Churchill heard of the idea in April of that year and saw to it that it was tested on the Royal Navy light cruiser Penelope and the cargo ship HMS Lags.

However, the riggings offered mixed results and were not very seaworthy, and the Royal Navy grew disinterested. Moreover, it was assumed U-Boat operators would fall back on hydrophones and radio direction finding to track vessels from afar.

General Electric also developed and tested a light-diffusing system for the U.S. Navy on the tender USS Hamul before the project was abandoned. However, the system was transferred to Canada, which deployed two diffuse-lighting cloaked corvettes in 1943, the HMCS Rimourski and Edmundston.

These 1,036-ton Flower-class anti-submarine escorts had a single four-inch naval gun, a few machineguns, and four depth charge launchers. In a six-month refit, sixty bright projectors were fixed over the sixty-three-meter long vessels on both fixed and flexible mounts. A control system calibrated the lights to the ambient lighting, reducing spotting distance up to 70 percent in tests. However, the system was still slow to adapt, and the projectors proved vulnerable to seawater and pounding waves.

Nonetheless, both corvettes saw action. On August 25, 1943 Edmunston was part of convoy in the Bay of Biscay that came under attack by Do 217 bombers equipped with radio-guided missiles. Though the Edmundston escaped being hit, it’s unknown whether its camouflage proved of any benefit.

The Rimouski, meanwhile, participated in a bizarre scheme to capture a Type IXC U-Boat. The Kriegsmarine had attempted to coordinate the escape of several U-Boat commanders held in Canadian Camp 30 through coded messages in letters sent via the Red Cross. However, Canadian intelligence intercepted the letters and eventually detained the tunneling prisoners, though one managed to escape by zip-wiring down an electric cable and made it to the rendezvous point before being captured.

Meanwhile, the Rimouski spearheaded a Canadian taskforce seeking to bushwhack submarine U-536 as it sought to extract the escapees at Pointe Maisonette at night on September 26, 1943. A mobile ground-based radar was deployed to pick up U-536’s position, and the Canadians flashed the lights intended to signal the prisoner’s presence.

At first, the Rimouski’s lighting system apparently kept her invisible as she crept towards the U-Boat. But then either an error in the signals or a sound contact on hydrophones tipped U-536’s Captain Rolf Schauenberg that he was being lured into a trap. He did not surface his submarine and eluded the Canadian ships, though the ill-fated U-Boat was sunk several weeks later.

The British also tried outfitting Hudson bombers with diffuse lighting, but found the electrical demands of illuminating an airplane in broad daylight excessive. However in 1943, the United States’ National Defense Research Committee took a crack at the same idea using a different system known as Yehudi lights—named after an old catchphrase “Who’s Yehudi?” with the rejoinder “The man who wasn’t there.”

Instead of attempting to illuminate the entire airplane, Yehudi lights projected towards a specific target. This was achieved by ringing the nose or engine nacelles and lining the leading edges of the wings and elevators with forward-facing lamps. Photo-cells on the top of the wings would register the natural illumination and automatically adjust the intensity of the lamps to match it. However, the scheme only worked if the aircraft’s nose was pointed within three degrees of the target.

The lights were first tested on a full-scale plywood model of a chunky B-24 Liberator strategic bomber suspended by cables. Observers reported being able to see the cables, but not the plane. Two aircraft were eventually tested: the four-engine B-24 Liberator (project AC-45) and tubby single-engine TBF Avenger torpedo bomber (project NA-188, photographed here). Both types could carry search radars to detect surfaced submarines, and were normally used to escort convoys and hunt U-Boats using rockets, torpedoes and depth charges.

World War II-era submarines needed to surface frequently to suck in air for their diesel generators. Surfaced submarines, however, could be detected on radar and swiftly attacked by Allied patrol planes. But watchful U-Boat commanders could spot sub-hunting planes from miles away and crash dive in less than a minute to evade them.

The lights on the Yehudi-equipped Avenger proved so effective in one test, however, that it was not spotted until it was just 1.6 miles away—giving it enough time to execute an attack on a surprised submarine before it could dive. An uncamouflaged plane was spotted twelves miles distant during the same test.

Though aircraft-mounted Yehudi lights proved effective, the device was never deployed operationally. This was because of the introduction of centimeter-wave radars gave anti-submarine aircraft such efficiency that U-Boats rarely surfaced during the day; air-search radars were assumed to make visual cloaking obsolete; and scaring submarines into crash diving and slinking away was considered desirable for convoy escort.

However, though radar, infrared sensors and long-range missiles continue to limit the usefulness of visual cloaking systems, the concept has always retained appeal. Due to concerns that hefty F-4 Phantom jets over Vietnam were being spotted too easily, a “Compass Ghost” model was tested in 1973 with nine belly-mounted Yehudi lamps and a special blue and white camouflage scheme which reduced spotting distance by 30 percent. The Air Force ditched the lights but kept the paint scheme.

Sébastien Roblin holds a master’s degree in conflict resolution from Georgetown University and served as a university instructor for the Peace Corps in China. He has also worked in education, editing and refugee resettlement in France and the United States. He currently writes on security and military history for War Is Boring. This piece was originally featured in July 2018 and is being republished due to reader's interest.