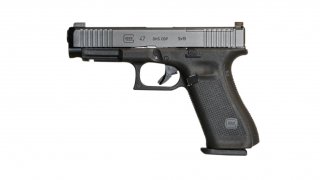 Since the March 22 shooting at a grocery store in Boulder, Colorado that left ten people dead including a police officer, there has been speculation that President Joe Biden would take executive action if the Senate remains unable to pass any new gun control measures. However, Vice President Kamala Harris has indicated that the president is unlikely to make such a move at this time.

In an interview with "CBS This Morning" on Wednesday, the vice president called upon Congress to move to pass new gun control legislation.

"It is time for Congress to act," Harris said.

"And stop with the false choices," she added. "This is not about getting rid of the Second Amendment. It's simply about saying we need reasonable gun safety laws. There is no reason why we have assault weapons on the streets of a civil society. They are weapons of war. They are designed to kill a lot of people quickly."

Harris also urged the Senate – where she could cast a deciding vote in a tie – to approve two bills that were recently passed by the House of Representatives. This included the Bipartisan Background, which if passed would require new background check requirements for all gun transfers including those conducted by private parties; and the Enhanced Background Checks Act to close the so-called "Charleston loophole." The latter bill provides that if the current national background check system is not immediately able to determine if a buyer is able to legally obtain a firearm, and the FBI does not conduct an investigation within three days, the seller is allowed to proceed with a sale. The bill extends the initial background check review period to ten days.

"The point here is, Congress needs to act, and on the House side, they did," Harris told CBS News' Gayle King. "There are two bills which the president is prepared to sign. And so we need the Senate to act."

As it currently stands, however – with the Senate split 50-50 and West Virginia Democrat Sen. Joe Manchin opposed to the House bills – it is unlikely either will be approved by the Senate. King asked the vice president if in such a case, President Biden would instead use executive action.

Harris refused to directly answer and instead suggested that the only way any move couldn't be overturned by a future president was for Congress to pass any gun control legislation, which President Biden could sign into law.

"If the Congress acts, then it becomes law," said Vice President Harris. "And that is what we have lacked, that is what has been missing. We need universal background checks. You know various states have done it but there's no universal approach to this. We should first expect the United States Congress to act. I’m not willing to give up on what we must do."