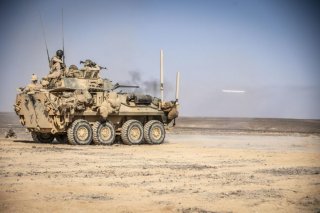 The Marine Corps is acquiring a new armored combat vehicle intended to launch and operate drones while on the move in combat, an effort intended to bring new dimensions of manned-unmanned teaming to multi-domain armored warfare.

It is called the Advanced Reconnaissance Vehicle (ARV) and the Corps recently awarded deals to General Dynamics Land Systems and Textron Systems to build and deliver prototype vehicles. A decision or down-select is expected in 2023 following extensive testing.

The mission scope is both varied and complex. It is highly centered upon aerial and ground surveillance and sensing, a technological capacity further supported by advanced command and control systems such as high-speed computer processing and target acquisition, a Corps statement said.

The ARV will operate both tethered and untethered drones to add an organic, or built-in tailorable unmanned system solution for the maneuvering recon vehicles.  Having drones built directly into the architecture and command and control of armored combat vehicles brings largely undiscovered tactical advantages in certain respects.

Data from the drone feeds will not need to go to a single viewing station, tablet or laptop to then be downloaded and processed before being transmitted. Command and control systems such as data processing, analysis and even transmission can be built in to happen organically in a way that massively streamlines operations. Intelligence, which is of critical importance and often time-sensitive, can reach its needed destination more quickly and efficiently, therefore favoring the prospect of prevailing in warfare.

Intelligence data can feed directly into a vehicle command and control system without needing to first travel through a separate ground control station to be processed. Advanced algorithms can quickly work to identify points of relevance such that human decision-makers do not need to sift through hours and hours of video material to find critical points of interest. This kind of analysis can happen automatically at the point of receipt, a possibility that greatly improves attack efficiency in warfare.  Forward operating ARVs could find and highlight key enemy targets for follow-on heavy armored forces to attack.

With many handheld or soldier-launched drones, and even some dispatched from vehicles operating as purely point-to-point data nodes, having unmanned systems technology woven directly into the command and control of an armored vehicle itself, in a position to network the information, brings new possibilities to warfare.

In addition to aerial drones, plans for the ARV also include a need to operate forward robotic vehicles to test enemy defenses, conduct high-risk reconnaissance missions or even deliver lethal attacks when directed by a human.