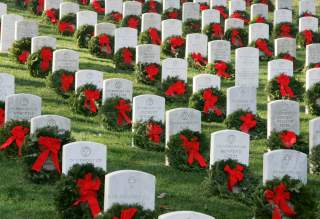 It was a decidedly bittersweet experience for me. Our group convened in Section 60, one of larger sections of the cemetery, and the resting place for many of those killed in the nation’s post-9/11 wars; in other words, the wars that I’ve been spending my 16+ years here at the Cato Institute mostly trying to stop. But it had far greater resonance to those around me who had family members and friends buried there. They knew the people behind the names on the stones.

So I kept quiet. This day was about those men and women who gave their lives in distant lands, not for criticizing those who sent them there. As we placed a wreath by every headstone, we read the names of those who died, and the dates of their passing. Some were killed in action, usually at a very young age; others served in the nation’s wars, but went on to enjoy a long life after. As mortal, finite beings, we die twice: on the day when we expend our last breath, the second time when our name is spoken aloud for the last time. By that standard, American servicemembers may live on in memory for a very long time. Though this was my first time placing wreaths, I can imagine it becoming an annual event for me—if not at Arlington, then perhaps at some military cemetery elsewhere.

But while Saturday was a day to honor the dead, it might also have been an occasion for the rest of us—those neither serving in the military, nor responsible for starting, expanding, or continuing the nation’s wars—to ponder why they died, and to wonder whether they needed to. Wreaths across America's organizers explain that their mission is to "REMEMBER the fallen… HONOR those who serve… TEACH our children the value of freedom." I might add that it is an opportunity for all of us, young and old, to think about this nation's approach to national security, and to question whether that approach actually advances freedom, both for us, and those whom we claim to be liberating.

For example, I couldn’t help but wonder how many of the thousands of people around me were even aware of the Washington Post’s explosive series of articles revealing a pattern of deceit and misdirection that has sustained the nation’s longest war in Afghanistan. If those thousands of volunteers at Arlington, or even a fraction of them, had read the original story, or read or heard the many commentaries and podcasts since it was published (e.g. here, here, here, here, here, and here), would that make them less supportive, less willing to accept what they have been told, almost since the 9/11 attacks? Might they be more open to arguments for ending the endless wars? In other words, for trying to actually reduce the number of new graves that will be dug at Arlington in the coming year?

For now, that doesn't seem to be happening. The arguments for continuing these wars prevail, mostly by inertia. In one of the only mentions of the Post series that I heard on the Sunday morning shows, on CBS's "Face the Nation", National Review's David French dismissed the revelations as inconsequential. French essentially blamed the officials' lies on the American people's desire for irreconcilable things: both security and to bring the troops home. But French's claim is merely emblematic of the sentiments that have sustained the GWOT since its beginning: the assertion without proof that thousands had to die, and trillions had to be spent, in order to prevent another 9/11. By now, we have many reasons for at least questioning whether the dangers are as grave, and therefore whether these wars are as essential to our safety, as French and others would have us believe.

Here's hoping, therefore, that many more Americans remember those fighting and honor their service by actually scrutinizing their missions. If more people conclude that the endless wars are no longer serving the national interest, they might finally push to end them.

This article by Christopher A. Preble originally appeared in the CATO at Liberty blog in 2019.