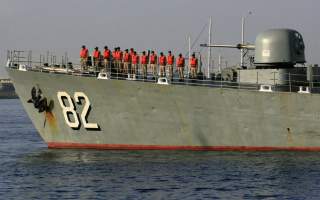 Key point: Tehran keeps building new ships but they are just variations on the same old design. Sanctions and a lack of domestic capacity means no stunning warships for Iran.

The Iranian navy announced it would build a new kind of warship -- a destroyer displacing as much as 7,000 tons of water, potentially placing it roughly in the same class as major American and European surface combatants.

Be skeptical. Iran for decades has failed significantly to expand its surface fleet. The lack of resources that so far have constrained Tehran’s fleet likely will continue to limit it. Don’t count on a “mega-ton” destroyer, as Iranian media described it, to enter service any time soon.

The admiral said the new destroyer would displace between 5,000 and 7,000 tons of water and would possess long range and high endurance. Iran frequently announces naval deployments across the Atlantic to U.S. waters but never actually has followed through on the announcements.

At present, the Iranian fleet’s biggest warships are corvettes displacing around 1,300 tons of water. All the corvettes are based on a British design dating to the 1970s.

The fleet in December 2019 announced plans to manufacture a 300-feet-long, helicopter-carrying trimaran warship it calls Safineh. If and when it enters service, the triple-hill vessel will “be used in asymmetric coastal warfare and rapid-reaction operations,” Fars explained.

But it’s worth noting that every new surface warship Tehran has managed to acquire in recent years at best is a slight improvement on the same basic corvette design the Iranian fleet has relied on for nearly 50 years.

The Iranian navy in August 2019 announced it will return to service the frigate Damavand following 18 months of repairs. Damavand in January 2018 collided with a pier, killing two sailors and badly damaging the vessel.

The Moudges are reverse-engineered copies of Iran’s British-designed, 1970s-vintage Alvand-class ships, three of which remain in service.

The seven Moudges and Alvands are the biggest and most powerful surface ships in the Iranian fleet. Tehran describes the vessels as “destroyers,” but the ships actually are corvettes by international naval standards.

Still, Iran heralded Damavand’s return to service. “The destroyer has been upgraded and equipped with the latest technologies, making it ready to face the harshest situations in the Caspian Sea,” Khanzadi told Iranian media.