X-29: The Best Fighter Jet You Will Ever See (In a Museum) 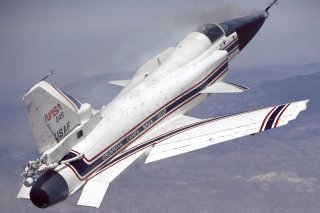 Packed with cutting-edge features, the Grumman X-29 was one of the most innovative fighters of its time—today, its legacy is confined largely to the museum.

In the early 1980s, the U.S. Air Force collaborated with NASA and the Defense Advanced Research Projects Agency (DARPA) to envision the plane of the future: an amalgamation of all the latest design concepts and cutting-edge engineering techniques in one experimental fighter. Grumman Corporation was granted an $87 million contract in 1981 to build two experimental, X-series aircraft.

The X-29 was a conspicuous showcase of unusual and, in some instances, forward-looking design decisions: a digital fly-by-wire system, aeroelastic tailoring, front-mounted canards, composite materials used throughout the aircraft, and— most controversially— forward-swept wings.

As we covered in our analysis of the Soviet Su-47, the thinking behind forward-swept wings is ingeniously simple. With typical rear-swept wings, air tends to move naturally from the wing root to the wingtip. By comparison, forward-swept wings funnel air inwards from the wingtip to the wing root. Inverting the wings was believed by some to offer greater maneuverability, particularly in the crucial moments immediately after a stall. As Christian Gelzer, chief historian at the NASA Armstrong Flight Research, put in a CNN interview, "At the time, this maneuverability was believed to be absolutely essential to fighter superiority. If your airplane is going to stall before mine, I can shoot you out of the sky in a heartbeat."

A Design That Failed:

But there are compelling reasons why so few aircraft dabbled in forward-swept designs; prime among them, extreme stall instability and a relatively high chance of structural failure. Forward-swept wing designs are so dangerous and difficult to pilot that the X-29’s advanced computer systems were less of a innovation than they were a necessity: "It was unflyable -- literally -- without a digital flight computer onboard, which made corrections to the flight path 40 times a second,” said Gelzer. Gelzer added that, if all three of its onboard digital flight computers failed at the same time, the X-29 would have torn itself apart so quickly that the pilot wouldn’t even have had a chance to eject himself.

In time, advancements in thrust vectoring technology would make forward-swept technology obsolete by offering similar aerodynamic benefits at a fraction of the risk. Neither the X-29 nor the Soviet Su-47 prototypes resulted in a serially-produced model; both the US and Russia moved on to superior thrust-vectoring alternatives, notably including the F-22 Raptor for the former and the Su-35 for the latter.

A few of the X-29’s other features, like the wide-ranging use of composite materials to reduce overall weight, have since become the industry standard across commercial and military aircraft alike.

The X-29 flew a total of 422 research missions, generating rafts of aerodynamic and aircraft engineering data on everything from canard placement to vortex flow control (VFC) technology, handling under extreme instability, and airfoil design. The X-29 not only pushed the boundaries of aerodynamics with a slew of new and extreme design features, but unlocked a veritable trove of advanced aircraft engineering insights.

Both X-29 models were retired to museums by 1991. One sits in the Research and Development Gallery at the National Museum of the United States Air Force in Dayton, Ohio, and the other is at the NASA Neil A. Armstrong Flight Research Center at the Edwards Air Force Base in California.

Image: This photo shows the X-29 during a 1991 research flight. Smoke generators in the nose of the aircraft were used to help researchers see the behavior of the air flowing over the aircraft. The smoke here is demonstrating forebody vortex flow. This mission was flown on September 10, 1991, by NASA research pilot Rogers Smith.