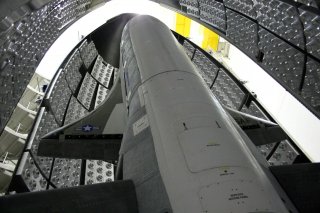 The X-37B is an experimental testbed platform and technology demonstrator designed by Boeing for the U.S. Air Force. The program is intended to develop a reusable space place that conducts experiments in space and safely returns its payload safely back to Earth.

Similarly to the Space Shuttle, the X-37B is launched vertically into low Earth orbit, piggybacking atop an Atlas V rocket. Once at altitude, where it remains for most of its mission duration, the X-37 makes observations and conducts experiments—but the X-37B is significantly smaller and unmanned. When prompted by ground controllers, the X-37B can maneuver itself back into reentry through Earth’s atmosphere, descends to land, and deploys landing gear for a runway landing.

The X-37 program originally began as a NASA project, though responsibility for the orbiter was eventually passed on to the Department of Defense in the mid-2000s. This transfer has led to speculation that the X-37 program is actually a military project aimed at spying on China’s first space station, the Tiangong-1. Alternative theories, citing the X-37’s payload capability, posit that the X-37 program could be used for spying on various satellites in space, or for developing and testing space-based weapons.

One of the significant design challenges the X-37 program had to overcome was the reusable nature of the spacecraft and the intense heat generated by reentry into Earth’s atmosphere—in the initial stages, the X-37 reaches incredibly fast Mach 25 speeds or 25 times the speed of sound. In addition to great speed, the X-37 is unmanned and so can remain in orbit for a very long time.

It was reported that Boeing had plans to build a so-called X-37C, which would essentially be a scaled-up version of the X-37B. This larger orbiter would also be equipped to support astronauts in space, making the C variant a manned orbiter and would potentially be a more economical way of getting manned flights into low Earth orbit.

The X-37B was just awarded the Collier Trophy, according to a U.S. Air Force press release. The Trophy “has been awarded annually since 1911 and is one of the most prominent accolades in aviation.” Previous winners of the Collier Trophy read like a who’s who of aviation. “Previous winners include Orville Wright, Howard Hughes, as well as the Apollo 11 lunar landing team, Apollo 8, Mercury 7 and more recently, the International Space Station. Also earning the distinction are the B-52, the Boeing 747 and the F-22, among others.”

In 2015, the X-37 program was awarded the Space Achievement Award by the Space Foundation thanks to the reusable nature of the program.

Despite the reservations some may have about the true nature of the orbiter, there is no denying its technological capabilities and the awards it has won. Who knows—maybe the Space Force will get a fleet of them in the future.