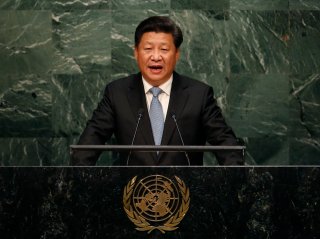 “Through long-term and persistent hard work, China has successfully embarked on a path of human rights development that conforms to the trend of the times and suits its own national conditions,” Xi told Bachelet, according to China’s state-run CCTV television network.

China has previously come under criticism from UN leaders for its restrictions on political activity; the country’s ruling Communist Party dominates the government and imposes restrictions on freedom of speech, assembly, and religion. However, leaders in Beijing have criticized other nations and international organizations for critiquing China, arguing that every country has its own trajectory for human rights development and lectures on human rights unnecessarily politicize the issue.

“On the issue of human rights, there is no perfect ‘utopia,’” Xi is reported to have said. “We don’t need ‘masters’ that dictate to other countries, let alone … turning the human rights issue into a tool.” He later offered a general criticism of groups that engaged in “double standards” and “interference in the internal affairs of other countries under the pretext of human rights.”

Bachelet’s virtual meeting with Xi came during her six-day visit to China, including an excursion to Xinjiang, China’s sparsely populated northwestern “autonomous region” home to the native Uyghur Muslims. Xinjiang’s authorities have been widely criticized in the Western world for alleged human rights violations, including the operation of labor and “re-education” camps that have reportedly detained more than one million Uyghurs suspected of anti-government beliefs.

Although Bachelet is touring a camp as part of her tour, the U.S. government has criticized that leg of the trip, arguing that Chinese authorities will choreograph her visit to ensure that she only speaks to pro-Beijing Uyghurs and will use the trip for propaganda purposes once it is complete.

“We think it was a mistake to agree to a visit under these circumstances,” U.S. State Department spokesman Ned Price told reporters on Tuesday. “The high commissioner will not be granted the type of unhindered access … that would be required to do a complete assessment and to come back with a full picture of [human rights abuses].”

Bachelet countered that direct talks with the Chinese government were essential for creating dialogue and lasting change.

“For me, it is a priority to engage with the government of China directly, on human rights issues, domestic, regional, and global,” she said during the meeting. “For development, peace and security have to be sustainable—locally and across borders—[and] human rights have to be at their core.”