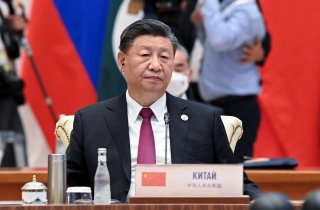 Russian president Vladimir Putin and Chinese president Xi Jinping met in Samarkand, Uzbekistan on Thursday, where the two leaders reaffirmed their commitment to their “no limits” partnership and condemned attempts by the United States and Europe to create a “unipolar world,” according to a readout released by the Russian president’s office.

During the meeting—conducted on the sidelines of the annual summit of the Shanghai Cooperation Organization, a Eurasian security conference—Putin alluded to the “model” of Sino-Russian relations, suggesting that their partnership played a “key role in ensuring global and regional stability.”

“Together, we advocate the formation of a just, democratic, and multipolar world order based on international law and the central role of the UN,” Putin said. He also expressed gratitude to Beijing for “the balanced position of our Chinese friends in connection with the Ukrainian crisis,” referring to Russia’s invasion of its western neighbor in February. He briefly acknowledged that Moscow “underst[ood] your questions and concerns about this,” a rare allusion to Chinese reservations about the conduct of the war, before shifting to a condemnation of recent Western “provocations” in the Taiwan Strait.

In his response, Xi emphasized the importance of restoring stability to the global world order and claimed that Moscow and Beijing together could play a key role in bringing an end to international unrest.

“China is willing to work with Russia to play a leading role in demonstrating the responsibility of major powers, and to instill stability and positive energy into a world in turmoil,” the Chinese leader said.

Putin and Xi, who referred to each other as “comrades” and “old friends,” also discussed economic ties between Moscow and Beijing during their remarks. China has refused to participate in international sanctions efforts against the Kremlin and has consequently emerged as an essential lifeline for Russian exports, particularly oil and natural gas. Putin noted the increase in annual bilateral trade in his remarks, observing that it had increased by thirty-five percent to $140 billion in 2022 and vowed to increase it to $200 billion “in the near future.”

Xi’s and Putin’s meeting in Uzbekistan marks the first in-person meeting between the two leaders since February when Putin traveled to Beijing to watch the opening ceremony of the 2022 Winter Olympics and where the two leaders proclaimed the Sino-Russian “no limits” partnership. Some observers have since speculated that Putin visited Beijing to inform Xi about his plan to invade Ukraine later in the month, observing that the invasion began only four days after the end of the Winter Olympics. China has denied that it knew about the invasion in advance.