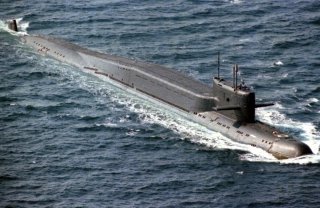 Russia’s Navy is moving forward with plans to decommission one of its Soviet-era nuclear ballistic missile submarines (SSBN).

“In 2022, the Yekaterinburg will be withdrawn from the Northern Fleet’s combat structure and sent for disposal,” a defense industry insider told Russian media outlet TASS earlier this week. TASS has not managed to corroborate this information prior to the publication of this article.

TASS’s source added that the K-84 Yekaterinburg has been in service for thirty-six years, though the other six Delta IV submarines are similarly old. The youngest Delta IV model, K-407 Novomoskovsk, has served for thirty-one years, while the K-51 Verkhoturye entered service one year before theYekaterinburg.

In late 2011, Yekaterinburg suffered an onboard fire while stationed in the PD-50 floating drydock in northwest Russia. The fire reportedly began when sparks from routine welding work made contact with adjacent wooden scaffolding. The resulting conflagration quickly penetrated the submarine’s rubber anechoic coating and spread to the sonar acoustic chamber. Authorities struggled for twenty hours to put out the fire, finally deciding to partially submerge Yekaterinburg in order to douse the flames. Despite initial denials from Russian authorities—and standard Russian protocol dictating that submarines must unload their weapons upon docking—it was later revealed that the Yekaterinburg was carrying up to sixteen R-29R submarine-launched ballistic missiles (SLBMs) at the time of the fire. These nuclear-tipped missiles could feasibly have exploded during the fire, with potentially catastrophic consequences for the local town of Murmansk and the broader region.

Following a commission to assess the damage, it was determined that the Yekaterinburg would be repaired and recommissioned for a five-year period. The submarine was re-commissioned in December 2014 and removed from active service in 2020.

The Delta IV class is the final iteration in what became a decades-long Soviet project to design an advanced, versatile SSBN platform. Outwardly resembling the Delta III line, Delta IV submarines were markedly deadlier than their predecessors. The Delta IV revision brought enhanced targeting capabilities and supported the new R-29RMU Sineva SLBMs—capable of carrying four one hundred kiloton warheads and boasting a maximum range around eighty-three hundred kilometers, these missiles offered a substantial performance leap over the original 1970s R-29 SLBM. Unlike their predecessors, the Delta IV can carry a wide range of torpedo types and anti-submarine torpedo missiles. Shortly before its onboard fire, the Yekaterinburg tested a new iteration of the R-29RMU, the R-29RMU2, which reportedly entered service in 2014. That missile boasts as many as twelve one hundred kiloton warheads and reportedly supports an effective range of up to twelve thousand kilometers. The Delta IV class also brought marginal noise signature improvements, including a new acoustic coating and changes to the propeller design, though stealth performance was never a top priority for Delta submarines.

There is no indication that Russia’s Navy has immediate plans to decommission any other currently active Delta IV vessel, but all of Russia’s remaining Delta and Typhoon models will eventually be replaced by the new Borei line of strategic submarines.