Yes, Britain's 6th-Generation Tempest Stealth Fighter May Be as Good as the F-35 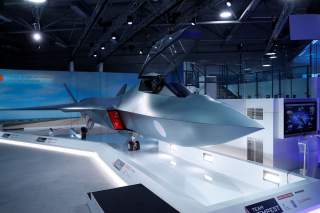 26 Nov. 2019 -- The Tempest will supposedly boast a laundry list of sixth-generation technologies such as being optionally-manned, mounting hypersonic or directed energy weapons, and capability to deploy and control drone swarms. However, it may also represent a Brexit-era gambit to revive defense cooperation with Germany and France.