Yes, Japan's Izumo-Class Helicopter Carriers Are Getting the F-35 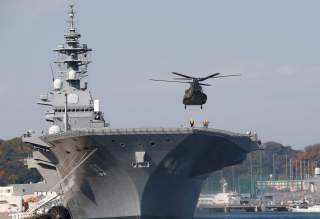 Key point: Tokyo will pair the F-35 with its two helicopter carriers. This will be the first time that modern Japan has true, fixed-wing aircraft carriers.

David Axe serves as the Defense Editor of the National Interest. He is the author of the graphic novels War Fix, War Is Boring and Machete Squad. This first appeared earlier in 2019.