Yes, Moscow Is Trying to Make Belarus a Part of Russia 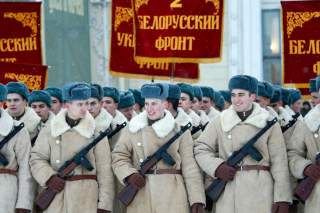 Key point: Moscow wants to bring Belarus into a new federal union, however Minsk doesn't want to play ball. What will Russia do to continue and raise the pressure?

Russia is escalating up its efforts to essentially annex Belarus while also strengthening its grip on eastern Ukraine by offering Russian citizenship to many Ukrainians.

Meanwhile Russian agents actively have interfered in democratic elections across Europe as well as in the United States. Besides offering assistance to the 2016 campaign of Pres. Donald Trump, Russian hackers in 2016 also gained access to voter rolls in two Florida counties, the state’s governor revealed in mid-May 2019.

“The Kremlin has a strategic interest in consolidating control over Belarus and ensuring the long-term alignment of its government and its people with Russia,” Mason Clark and Nataliya Bugayova, analysts with the Washington, D.C. Institute for the Study of War, wrote in a May 14, 2019 briefing.

Consolidation of Russian influence could result in a so-called “Union State” joining Russia and the much smaller Belarus.

Russian president Vladimir Putin “likely fears the development of a ‘color revolution’ or other political movement to integrate Belarus with the West” after Belarusian president Alexander Lukashenko leaves office, Clark and Bugayova added. Lukashenko in 2015 was elected to his fifth five-year term as president.

“The Kremlin also intends to expand its military basing in Belarus to expand its threat to the borders of Ukraine and NATO,” the analysts continued. “Putin could even view leadership of the Union State as a viable means to remain in power after the end of his latest term as Russian president in 2024.”

Russia’s main agent in Belarus in 2018 and 2019 was its ambassador to the country, Mikhail Babich. Moscow recalled Babich in April 2019.

Babich used his tenure to push for the accelerated implementation of the 1996 Union Treaty, which calls for a federation-type state that ensures the long-term allegiance of Belarus to Russia.

He lobbied business leaders and opposition politicians in Belarus to build ties with Russia. He threatened to condition economic benefits from Russia upon demonstrated progress towards the Union State. He even went so far as to correct statements by Lukashenko.

The Belarusian foreign ministry accused Babich of “failing to understand the difference” between an “independent government” and a “federal subject” of Russia. The Kremlin supported these calls by exerting additional forms of economic pressure (such as suspended gas subsidies and bans on certain fruit imports) on Belarus.

The Kremlin also successfully secured an implementation roadmap for the Union Treaty in December 2018 after a series of high-level bilateral talks.

Lukashenko has fought back. “He has become increasingly vocal over the past year against encroachment on the sovereignty of Belarus by Russia,” Clark and Bugayova wrote. “He has called on domestic businesses to find alternative markets other than Russia. He also successfully pushed Putin to recall Babich.”

“Lukashenko may ultimately seek to disperse power across the political structures of Belarus to increase their long-term resilience to the Kremlin,” Clark and Bugayova added. “He has stated his intent to revise the Belarusian constitution to ‘give authority to other structures and branches of power’ outside of his office of the president.”

The Kremlin meanwhile is backing a proposed Russian law that would offer citizenship to an greater number of Ukrainians.

This measure is only the most recent step in a new campaign by the Kremlin. Putin originally signed a decree streamlining the citizenship application process for Ukrainians living in the [separatist-]occupied Donetsk and Luhansk Oblasts of eastern Ukraine on April 24, [2019].

“The Kremlin could use the need to protect large numbers of new Russian citizens to justify open military action in eastern Ukraine in the future,” Clark and Bugayova warned.

The government of Ukraine has condemned the Russian moves. Ukraine in April 2019 elected comedian Volodymyr Zelensky as its new president. Zelensky in early May 2019 vowed swift action in response to Russia offering passports to Ukrainians. “We're working now,” Zelensky said, “and then we will show [them]."