Yes, the Navy Is Building Another America-Class Amphibious Assault Ship 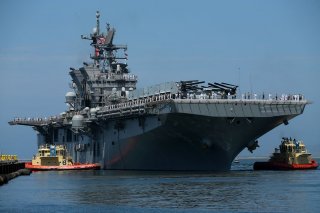 The U.S. Navy’s America-class amphibious assault ships are steadily taking shape as the service makes new progress starting to build its 4th ship in the class—LHA 9, a vessel expected to help usher in a new era of amphibious warfare for the Navy.

The first-in-class USS America launched in 2014 and the second, the USS Tripoli, has also launched. The third, the USS Bougainville, is under construction. America-class builder Huntington Ingalls now reports that the Navy has awarded them a long-lead items procurement contract for the 4th America-class amphib, called LHA 9 at the moment.

America-class amphibs can transport up to 3,000 sailors and marines, including elements of a Marine Expeditionary Unit, or MEU, designed for amphibious warfare. Amphibious technology on board the ship can include up to 60 HMMWs, Light Armored Vehicles, mortars, artillery and smaller Internally Transportable Vehicles, or ITVs, configured to drive into the back of an Osprey, Navy and Marine Corps officials described.

The LHA 9 is referred to as the second Flight 1 America-class amphib as, like its predecessor the USS Bougainville, features a well-deck for launching watercraft such as amphibious assault ships, ship-to-shore transport craft and other vessels.

The first two America-class amphibs were built without a well-deck as a way to heavily emphasize air-power projection, particularly with the F-35B. Following the first two America-class amphibs, the Navy plans to use well-decks for the ship class, to ensure amphibious landings are possible moving into the future. The air power emphasis for the first two Americas is quite deliberate, as Navy strategies sought to leverage the additional reach and attack versatility of the F-35B, and also place a premium on longer-range attack in light of advanced, long-range weapons and sensors being used by potential adversaries.

The 2nd America, the USS Tripoli, is 844-feet long and 106-feet wide with a weight of more than 44,000 tons. A fuel-efficient gas turbine propulsion system brings the ship’s speed up to more than 20 knots, a Huntington Ingalls statement said.

The F-35B, already deployed on U.S. Navy amphibious assault ships, has already begun to shift the character of amphibious attack strategy. The Navy has worked extensively on preparing the America-class to operate the F-35 by reinforcing areas beneath the flight deck and adding new materials to landing areas to ensure they do not get heat damage.

Part of the challenge to F-35B integration is recognizing how its technologies will change concepts of operations, tactics and procedures; the F-35B is a very different aircraft than the Harrier jets it is replacing, Navy officials said. Harrier jets, which also have the ability to conduct vertical take-off-and-landings, are multi-role jets primarily designed for light attack missions—such as quickly flying over land locations where Marines are forward deployed and providing close air support.

The C5I (command, control, communications, computers, collaboration) requirements for the F-35B will be very different from how the Navy operates the Harrier.

At the same time, the return of a well deck is increasingly important as the Navy is emphasizing the development and deployment of more unmanned systems for amphibious attack to enable more dispersed, strategically complex amphibious attack possibilities.