Yes, North Korea's Nuclear Missiles Are Getting Better and Better 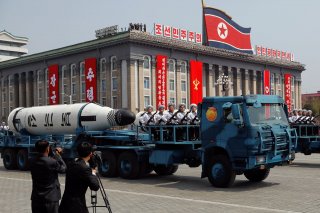 The Congressional Research Service (CRS) published a report earlier this week outlining North Korea’s recent progress in nuclear weapons development and missile research. In the two years following the Singapore summit between President Trump and North Korea’s leader Kim Jong-un, Pyongyang has drastically ramped up the scale and pace of its missile testing. The result, according to the CRS, is a concerning degree of rapid progress across a wide swathe of technical categories. Pyongyang’s buildup of nuclear warheads not only continues unabated at a capacity of up to seven additional warheads per year, but there is cause to believe that North Korea has “achieved a level of miniaturization required to fit a nuclear device on weapons ranging across the spectrum of its missiles, from short-range ballistic missiles (SRBM) to intercontinental ballistic missiles (ICBM).” North Korea’s consistent production of warheads is accompanied by the ongoing modernization of delivery vehicles, striving to maximize the efficacy of their ballistic missile arsenal with the implementation of in-flight maneuverability to better penetrate enemy airspace.

These recent advancements are consistent with what Japanese and South Korean military observers had been warning for the past several years: North Korea intends to circumvent Washington’s land-based THAAD network of missile defenses in East Asia by deploying submarine-launched ballistic missiles outside of THAAD’s effective engagement range. To this end, North Korea has made major strides in amassing an arsenal of modernized short and medium-range ballistic missiles designed to overwhelm Japanese and South Korean air defenses. The KN-25 stands as perhaps the best example of this approach, straddling the line between rocket and short-range ballistic missile (SRBM). The CRS notes that tests conducted in the past several years show that the KN-25 platform can discharge its missiles in a remarkably short twenty-second interval, making it especially potent when deployed in large numbers and directed at vulnerable South Korean infrastructure along the Korean Peninsula. The report concludes that the development and imminent proliferation of the KN-25, alongside the KN-24 SRBM and the KN-15 medium-range ballistic missile (MRBM), “pose significant threats to South Korea and U.S. assets on the peninsula.”

To be sure, these concerns are not new—Tokyo’s security establishment raised the distinct possibility in 2016 that Japan’s missile defenses may very well crumble before a saturated North Korean missile strike. The CRS paper underscores the growing consensus that THAAD is inadequate as an all-in-one defense package against an increasingly diverse and potent North Korean missile threat. To this end, South Korea has invested heavily in a ‘multi-layer’ missile defense doctrine that seeks to combine the effective operating ranges and unique capabilities of THAAD, modernized Patriot air defense systems, several indigenously produced short-range missile systems, and a robust airborne early warning and control (AEW&C) fleet to monitor, track, and intercept North Korean missiles in a wide range of potential attack scenarios.

Despite Washington’s reservations, Defense Minister Taro Kono is reportedly considering investing in offensive missiles to ensure a first-strike capability against Pyongyang’s military bases in the event of an imminent North Korean missile strike against Japan.