Yes, Norway Really Did Sink Its Own Warship. Here's Why. 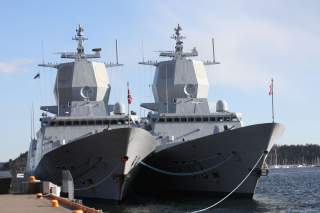 Congratulations, Norway: You played yourself.

Following a collision with a civilian vessel on Nov. 8, the captain of the Royal Norwegian Navy frigate HNoMS Helge Ingstad made the brilliant decision to deliberately run the vessel aground to prevent the warship, among the most capable in the NATO fleet, from sinking outright.

Here are the details, courtesy of Naval Today:

In an update on Monday, the navy said the frigate had been firmly secured to land with steel wires. A total of seven fixing points welded onto the frigate’s hull were fixed to anchors on land.

Those plans are officially doomed: Footage captured by aircraft from the Norwegian Coastal Administration showed the dismal current status of the frigate.

The incident occurred while the frigate was returning home from the Trident Juncture military exercises, NATO's largest show of strength since the Cold War.

Congratulations, Norway: You played yourself.