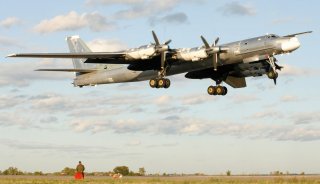 Key point: This bomber is important to Russia's strategic forces. It might still be propeller-driven, but don't let that fool you.

The Tu-95MS’s primary armament is the Kh-55 air launched cruise missile (ALCM). The Kh-55 is a subsonic missile with a range of around 2500 km. The current fielded nuclear armed missile is the Kh-55SM, which increases the range of the Kh-55 to 3500 km. Its conventionally armed counterpart is the Kh-555, with a range of 2000 km. The Kh-555 has seen use in Syria fired from Tu-95MS. The regular Tu-95MS6 carries six of these internally in a KMU-6-5 rotary launcher. The modernized Tu-95MS16 adds external pylons for an additional ten missiles, bringing the total up to sixteen. According to the 2018 Nuclear Notebook report by the Bulletin of Atomic Scientists, the Russian Air Force currently fields 25 Tu-95MS6 and thirty Tu-95MS16. The report doesn’t list any numbers for the new Tu-95MSM modernization, but estimates that only a “few dozen . . . perhaps around 44” will be modernized.