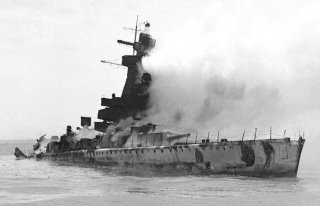 Key point: These two designs were not meant to be merged. Here's what happened when they were.

The exact military requirements for such a weapon shifted as the concept developed. Originally envisioned as stealthy coastal attack platforms, the “submarine monitors” became high-power anti-ship weapons. Or wouldhave, except they never saw wartime use. Perhaps the Admiralty realized the threat such subs with guns posed to their own Royal Navy if their use proliferated.

The later, even larger Japanese I-400-class submarine aircraft carriersextended the aircraft-as-long-range-artillery concept to its mid-century conclusion. The huge subs mounted five-inch deck guns and anti-aircraft machine guns, but relied on their embarked aircraft and their weapons for main firepower.