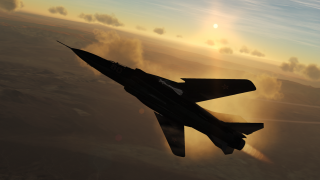 A retired U.S. Air Force colonel who once commanded a secret unit flying Soviet-made fighters spoke about his experiences to Russian state media.

Retired colonel John Manclark, commander of the 4477th Test and Evaluation Squadron from 1985 to 1987, told Sputnik he wouldn’t talk about how the unit, which operated under the code name Constant Peg, acquired its MiGs.

But he did summarize his impressions of several important Soviet fighter types, including the widely-despised MiG-23.

The 4477th operated from Tonopah Test Range in Nevada between 1978 and 1988, flying Russian MiG fighters and at least one of their Chinese derivatives in a dangerous effort to teach American pilots how to defeat the planes in combat.

The squadron in total flew 15,000 sorties and trained 6,000 U.S. pilots, according to an Air Force documentary. Similar efforts continue today under different auspices.

"It all kind of got started back during the Vietnam War," Earl Henderson, a retired lieutenant colonel and Constant Peg commander in 1979 and 1980, said in the documentary. "The U.S. came into possession of some real Russian MiGs. We exploited them, found out how they worked and what all the engineering details were. And the test pilots went and flew them. Found out how fast they would go, how high they would go, how tight they would turn."

"I had no bosses who understood what we were doing. I had 200 enlisted people and 17 pilots. And no one helped me with whether the planes were flyable or what we could do with them. I mean we were just on our own," Manclark told Sputnik.

Manclark was fond of the delta-wing MiG-21, in which he completed more than 300 sorties. "You can tell a kid, 'Don't slow down when you fight a MiG-21, because they'd beat you if you slow down.’”

The main problem with the MiG-21 was its sometimes-poor acceleration. “If you got throttles back it took a long time for the engine to spool up and produce thrust," Manclark said

But learning to fly the nimble little fighter could be a challenge. The controls were unlabeled, so American experts guessed at their functions. "In the MiG-21 I had about eight switches I fooled with,” Manclark said. “All these other switches — I had no idea what they did and I didn't fool with them. Leave them alone."

Like other Constant Peg officers, Manclark feared and disliked the newer MiG-23, which also had a ground-attack variant. "It was a very unstable airplane,” he said. “Fast, faster than anything we had, but it was just very unstable. It would depart very easily, it would go out of control and spin.”

“No one liked it,” Manclark added. “The guys didn't like flying it. They didn't want to fly it.”

The squadron suffered at least two fatal accidents, losing a MiG-17 and a MiG-23 along with their pilots. Overall, the squadron crashed an airplane roughly every thousand flight hours, an accident rate 30 times the Air Force average at the time.