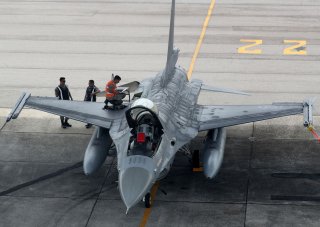 “We are doing lots of war games against peer competitors and came out to 386. That number is still the goal and then getting the right mix of the right squadrons and making sure they are ready to meet our nation’s demands,” General Stephen Wilson, Air Force Chief of Staff, told The Mitchell Institute for Aerospace Studies in a recent interview.

Wilson, and his former fellow Air Force pilot Lieutenant General David Deptula, Dean of the Mitchell Institute, both served during Desert Storm in the early 1990s, when the Air Force went to war with twelve operational squadrons. “Now we have less,” Deptula said in his conversation with Wilson.

The bottom line, according to senior Air Force leaders and experts observers, is that the U.S. Air Force will fall behind Russia and China by 2025 unless the service quickly embarks upon a sizeable expansion of its fighting technologies, weapons arsenal and major attack platforms. This means new bombers, fighters, drones, rescue helicopters and more. As part of the needed expansion, the Air Force Vice expounded upon a need to emphasize technological research and progress, citing eleven key areas of focus to include “Directed Energy, Hypersonics, AI, Autonomy, cyber, Quantum and Space,” among others.

Following a detailed analysis several years ago, which likely included close examination of threats, mission requirements and dangerous emerging technologies, the service laid out a request to grow from 312 operational squadrons up to 386. The largest needed increases, according to the Air Force plan, included a request for twenty-two new ISR Command and Control squadrons, seven more fighter squadrons and five more bomber squadrons.

The Air Force assessment, referred to by Wilson, says the analysis supporting the 386 squadrons needed to support the National Defense Strategy is based on estimates of the expected threat by 2025 to 2030. At the end of the Cold War, the Air Force had 401 operational squadrons. By any cursory estimation, it does not take much to notice an uptick in mission demands for the Air Force, coming on the heels of more than fifteen-years of counterinsurgency air support missions in Iraq and Afghanistan. Now, confronting the threat of major warfare, the service is facing substantial requests from combatant commanders.

Other details of the previous Air Force requested expansion plan include:

Meanwhile, statements from former senior Air Force leaders, Congressional analysts, observers and critics may go even further when it comes to voicing serious concerns about the service’s ability to meet anticipated threats—calling the current situation “dangerous.” “The USAF is a geriatric force—it has bombers, tankers, and trainer aircraft over 50 years old; helicopters over 40; and fighters over 30—it has a 2000+ pilot shortage,” Deptula told TNI during a previous interview.