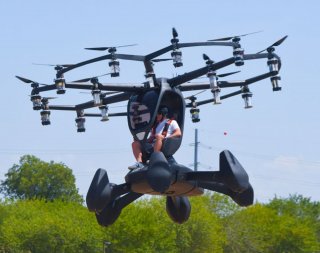 A first-of-its-kind flying car is now airborne, thanks to the Air Force Research Laboratory and industry innovation, potentially ushering in a new era in multi-domain combat attack operations.

The first car, called eVTOL for Electric Vertical Take-Off and Flight, may be but a beginning. It is a small cab with extended legs or wheels with what looks like a circular pattern of small drone propellers clearly intended to enable a “hover” capability.

Should this effort be met with continued success, there may be no reason why Humvees or even armored vehicles could one day quickly become airborne to climb mountains, attack enemy supplies and seek to overwhelm forces behind the initial breach area. This brings multi-domain options and could easily extend the reach and scope of attack operations.

What if an armed tactical vehicle is driving toward an enemy fortification, when forces encounter armed armored vehicles and rigorous terrain? What if, in order to avoid those vehicles, a combat vehicle quickly becomes airborne, finding cover behind a nearby mountain? Maybe an armed flying car could, in this fashion, be used for clandestine hit and run attacks?

A vehicle such as this could certainly let combat operations use a lighter, smaller footprint, therefore presenting fewer targets to an enemy. Without the risk of having armed air support operate simultaneously with advancing ground forces, attack operations could achieve multi-domain efficacy in a single platform.

The Air Force effort, called Agility Prime, plans to field a flying car by 2023, according to a service report.