Yet Again, the Navy’s Troubled Freedom-class Has An Issue 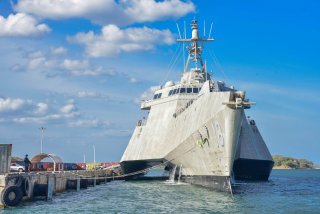 Add a faulty engine component to the seawater ingress, rust management issues, and damaged drive shafts to the list of problems the Littoral Combat Ships (LCS) have already sustained.

One Freedom-class Littoral Combat Ship, the USS Minneapolis-Saint Paul, needs significant parts retrofitting after the Navy discovered a faulty engine combining gear. This refit will be complicated and costly due to the class’s particularly complex engine design.

The Freedom-class featured several new technologies that were supposed to make the class incredibly capable. The Freedom-class's theoretical top speed is a spectacular forty-seven knots, thanks to two gas turbine engines and a pair of diesel engines that power four waterjets. However, the ship’s gearing components linking the machines are faulty and need replacement—but it’s not an easy repair, as the parts are located deep in the belly of the ship’s hull.

“It’s a very complex fix to replace the bearings on the combining gear. It’s a very tight space, there’s a lot of interferences that have to be removed,” an LCS deputy program manager told USNI News. “We completed that, we’re in the process of putting the ship back together and we will conduct at-sea testing of LCS 21 in the September timeframe.”

The United States Navy’s Littoral Combat Ships record is not very long but is very troubled. The ships, the Freedom- and Independence-classes, have been plagued by problems almost from their inception.

The list of problems both Littoral Combat Ships have suffered is extensive. Several Freedom-class ships have had seawater penetrate their engines due to faulty gasket seals. An Independence-class ship suffered driveshaft damage. One Freedom-class’ clutch failed to disengage.

As a consequence, both classes entered service later than planned and were massively over budget.

“We expect to validate the combining gear year effects at sea and at which point we will continue to implement with providing our fix across new construction and in-service ships in that, that those details are still being worked,” the LCS deputy program manager explained to USNI News. In addition, two other Freedom-class ships will need to be retrofitted, like the USS Minneapolis-Saint Paul. However, the last two Freedom-class vessels will implement the fix before entering service with the Navy.

Thanks, both to the Littoral Combat Ship's exorbitantly high costs and the far very problematic design, it is no wonder that some of the LCS hulls have already been retired from service by the United States Navy.