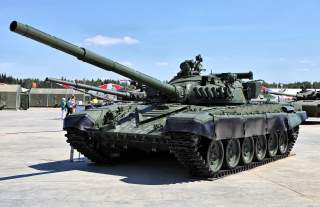 Reminder: There are very few, if any, western formations that can withstand an assault by 200 tanks.

After a flurry of rather disinformative “Tank Carousel” news from Russia the latest reportage from the Russian armed force tank exercise is much more interesting. At the beginning of August the handily named 90th Guards Vitebsk-Novgorod twice Red Banner Tank Division held it’s first divisional sized combat and live fire exercise at Cherbakul in the Chelyabinsk region.

The 90th division, that is stationed in the Sverdlovsk and Chelyabinsk regions, was founded in 2016 and is one of the heaviest hitting Russian formations around. It has a similar structure as the 4th Kantemirovskaya Tank Division that is part of the 1st Guards Tank Army.

The 90th Tank Division consists of the following units:

With three tank regiments and a motorized rifle regiment the Division has impressive offensive firepower. The tank regiments are equipped with variations of the T-72B main battle tank, with some of the formations fully equipped with the latest T-72B3 obr. 2016. The motorized infantry regiment is a wheeled one with a full complement of BTR-82A 8x8 infantry fighting vehicles. The first batches of the latest BMPT Terminator fighting vehicles have also been delivered to this division.

The regiments of the 90th Tank Division have mostly been training individually and the usual field exercises have been conducted as battalion tactical groups supported by limited air and artillery assets.

The latest exercise was very much a different beast. First of all, it included 7000 soldiers. The  divisions motorized rifles mounted a fluid defense against an enemy mechanized force. Then they feinted back to lure the enemy into a vulnerable position. After flanking the enemy force two of the divisions three tank regiments simultaneously attacked the enemy force with 200 main battle tanks.

The attack of the two tank regiments were coordinated as a single maneuver and it was supported by the divisional reconnaissance and artillery elements including the UAV unit. The divisions battle was also supported by the Russian air-force and army aviation, with Su-24, Mi-8 and Mi-24 being physically present over the training area.

This combat exercise illustrates the presumed role of the division. As it’s located behind the westwards facing front line units of the Russian Western Military District, it’s intended to plug gaps that hostile forces are trying to exploit or it will be used as a second wave assault formation that will take over the offensive from the 1st Guards Tank Army when it has exhausted its momentum.

Previously it was widely believed that only the 1st Guards Tank Division was capable of conducting complex combat operations with a full division operating as one unit. The new command and communications systems deployed by the Russian armed forces seem to enable the divisions and presumably armies to conduct far more efficient combat tactics than before.

Reminder: There are very few, if any, western formations that can withstand an assault by 200 tanks.

Special thanks to Aki Heikkinen for piecing the exercise events together.