You Can Do This: How to Turn a Humvee Into a Russian T-72 Tank 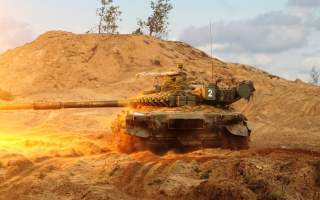 Want to turn a Humvee into a Russian T-72 tank?

It’s easy. Just call in the special effects wizards from Hollywood. The people who can make you believe that you’re watching real spaceships on the silver screen, or that a man in a costume is really a carnivorous monster.

Westefx, a Hollywood special effects company, has joined forces with the U.S. National Guard Bureau to produce special kits for military exercises. Instead of creating tooth-and-claw monsters, the kits will turn Humvees into the stuff of NATO nightmares: Russian T-72 tanks and BTR-60 armored personnel carriers.

“The kits -- each weighing approximately 1,700 pounds and fitting over the chassis of a Humvee -- resemble the size and silhouette of the tank and personnel carrier but with an inflatable canvas-like frame,” according to an Army press release. “Its gas-operated weapon systems simulate the firing of .50-caliber and 125-millimeter main guns that can be configured to multiple integrated laser engagement systems [MILES]. The MILES gear along with the kit's smoke generator, will enable soldiers to track and simulate target acquisition.”

A video of the visual modification kit, or VisMod, shows what looks like the turret and upper hull of a T-72 mounted atop a Humvee. The disguise won’t fool anyone standing a few feet away, but belching white smoke and with a big cannon in a revolving turret, it seems real enough at a distance.

And as the Army points out, “these kits also provide a more cost-effective alternative than using actual tanks and personnel carriers. The Humvees cost less and the Army has more of them.”

"A Humvee costs approximately $30,000 plus another maybe $5,000 to maintain for the year, whereas an M1A1 tank costs a lot more," said Sgt. 1st Class Clinton Doramus, the Idaho Army National Guard’s VisMod fleet manager. "It's initial and maintenance expenses that make these kits a lot more cost-effective to do on Humvees than tanks or Bradleys. Plus the Army doesn't just have 60 spare tanks sitting around somewhere."

In 2018, the National Guard Bureau signed a contract with Westefx, which has provided special effects for James Bond movies and “Men in Black 2.” The company has also provided props and battlefield special efforts for Exportable Combat Training Capability exercises, which train National Guard brigade combat teams.

“No enhanced battlefield training simulators can compare with the functionality, realism, durability and cost-effectiveness of this new VisMod vehicle," said Westefx owner Erick Brennan. "They are pretty amazing and we are really proud of them."

Fake tanks are nothing new. During World War II, the Allies created “armies” of wood or rubber tanks that fooled the Nazi aerial reconnaissance at D-Day and El Alamein. Hollywood has also created imitation tanks, including the embarrassing 1965 flick “Battle of the Bulge,” where West German M-47 Pattons were painfully disguised as Nazi King Tiger tanks (however, the authentic-looking “Tiger” tanks in the 1969 film “Kelly’s Heroes” were actually modified Soviet-made T-34s).

Armies have increasingly turned to computer simulations and virtual reality systems to train soldiers. It’s cheaper than buying and maintaining real equipment and the personnel to operate them. On the other hand, no computer-generated tank will generate quite the same feel as a real vehicle belching smoke and swiveling its turret toward you.