You Don't Really Need 5G, Your Self-Driving Car Does 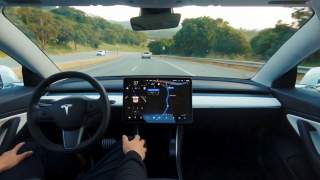 When 5G started rolling out across America last year, many people were disappointed. Most carriers are running 5G on extremely-high frequency millimeter wave (mmWave) bands, which means that signals can be blocked by walls and windows -- or even an innocent bystander. And unless your 8-year-old is demanding to watch Avengers: Endgame in full 3D this very minute, you can probably live with 4G download speeds. So what's the big deal?

While carriers are touting the super-fast download speeds made possible by 5G, and some tech enthusiasts are pumped about its energy savings, the real 5G game-changer is low latency.

Latency is the time it take for a signal to transmit data. When you tell your 4G phone to download a movie, it takes a few milliseconds (actually, more like 50) for your order to be transmitted to the phone company's base station, before anything else can happen.

With 5G technology running on mmWave, that latency can theoretically be pushed down to as low a 1 millisecond. That's because the waves themselves are so short that a full packet of waves doesn't take very long to send. Longer wavelengths can pass through walls, but they are, well, longer.

You probably don't care about saving 49 milliseconds in each direction when you're downloading a movie. But just imagine that your self-driving car is cruising down the highway at 70 mph, with another self-driving car following close behind. If a deer jumps onto the road and your car breaks, it has to inform the car behind you. With 4G wireless, the car behind you will drive 50 feet before it even gets your signal.

Self-driving cars or autonomous vehicles (AVs) are the killer app for 5G wireless internet. Right now, AVs are Clint Eastwood style lone gunslingers, roving the highways in search of a free lane. They see the world through camera lenses and LIDAR (similar to radar, but using lasers instead of radio waves). When they encounter other AVs, they pass right on by, without so much as a tip of the hat.

As more and more AVs crowd the road, they will operate more like cavalry. They will travel in troops (which are actually called "platoons"), bunched closely one behind another. Platoons have the potential to dramatically increase highway capacity, since you can safely pack many more AVs onto the road than cars with human drivers. There's also safety in numbers, since platoons of AVs won't have to worry about irrational humans beings sowing confusion in their ranks.

Millisecond latency will allow networked AVs to platoon within a car length of each other, which, to be honest, is what many rush-hour human commuters do right now. The difference is that AVs will be able to do that safely. No more chain-reaction crashes like the horrific 2019 pre-Christmas pile-up in Virginia -- not even in the fog.

As AVs come to dominate America's roads, they'll have to learn how to coordinate more closely with each other, and again that means 5G. Need to change lanes? Might as well ask first. Whose turn is it at that four-way stop? The cars will figure it out. Merging onto the highway at high speed? No problem at all.

Cell phone 5G will ultimately migrate down the spectrum as 4G is phased out and more desirable bands open up. But AVs, farm equipment, industrial robots, and other moving things will continue to take advantage of the low latency of mmWave communications. You can wait an extra 98 milliseconds, if it means that you can download your movie indoors. Your car has to take a call right now.