Your Mall Could Close: How Coronavirus Could Kill Retail Stores 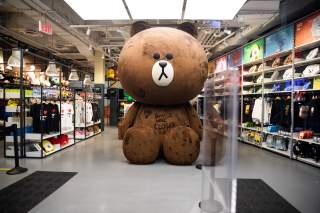 Airlines, cafes, hotels, restaurants and theaters are shutting down as COVID-19 infects the global retail sector. As shoppers shut their wallets, a consumer-driven global recession could be the next threat posed by the pandemic.

The latest U.S. Commerce report showed U.S. retail sales for February falling by 0.5 percent, the biggest decline since December 2018, and economists expect the situation to worsen as millions of Americans hunker down in their homes instead of traveling to school or work.

Auto sales, electronics, building materials and clothing sales all dropped in February, with sales at restaurants and bars falling by 0.5 percent after the Centers for Disease Control and Prevention recommended cancelling gatherings of 50 or more people. Sporting events and concerts have also been shut down, from the NBA to Major League Baseball and beyond.

“With spending likely to continue falling sharply over the coming weeks, the only question now is severe the second-quarter decline will be.”

“Social distancing” policies have shut not only schools but also bars, restaurants and theaters in New York, California and other states in an attempt to contain the pandemic that started in Wuhan, China last year.

“Disruptions from the coronavirus will bring the economy’s main engine to a halt,” Lydia Boussour, a senior U.S. economist at Oxford Economics in New York, told Reuters.

“As the virus keeps consumers at home and panic spreads, discretionary spending and ‘social consumption’ will take a significant hit.”

Last year saw a record number of store closures in the United States, yet this year could be even worse, according to industry analysts.

Research firm Coresight Research has predicted more than 15,000 store closures in 2020, up from last year’s 9,300. In 2019, retailers including Barneys New York, Charlotte Russe and Sears shut thousands of stores, with the retail sector losing 75,000 jobs amid the growing challenge posed by online retailers.

“I think we will see an increase in the number of Chapter 7 [bankruptcy filings],” Coresight Research CEO Deborah Weinswig said.

“Nobody knows how to deal with this.”

Although nations such as France and Italy have shut nonessential retail stores indefinitely, many U.S. retailers have been given the option to stay open. However, this has not stopped a slew of voluntary closures, including by Apple, Nike and Patagonia, while Walmart has slashed store hours.

Foot traffic to U.S. retail stores fell by more than 30 percent in the week ending March 13 compared to the previous year.

“The consequences of this are not minimal. This is going to be the death of a lot of companies,” Vibhu Norby, founder and CEO of B8ta, told CNBC.

Mall-based businesses are seen especially at risk, as well as companies whose products do not sell well online. Department stores are also considered “extremely vulnerable” in this environment, according to analysts.

A separate survey by the New York Federal Reserve showed a record plunge in factory activity in New York state, to levels last seen in 2009. The report followed moves by the U.S. Federal Reserve to slash interest rates to near zero and undertake hundreds of billions of dollars in asset purchases in an attempt to prop up the world’s biggest economy.

U.S. stocks have been on a roller-coaster ride, officially entering ‘bear market’ territory after suffering their biggest one-day drop since the 1987 crash but then rallying on hopes of fiscal stimulus. The White House is proposing a stimulus package of up to US$1 trillion to fight the impact of COVID-19, with emergency funds planned for individuals and small businesses.

Will the stimulus efforts be enough to avert recession – defined as two successive quarters of negative growth?

Goldman Sachs expects U.S. gross domestic product (GDP to slump to zero in the first quarter, contracting by 5 percent in the second quarter in what would virtually be recession. This follows U.S. GDP growth of a relatively healthy 2.3 percent in 2019.

“The outlook for all of 2020 has darkened substantially, however, as it is increasingly likely that a short and sharp recession will occur in the middle of the year,” Ben Ayers, senior economist at Nationwide in Columbus, Ohio, told Reuters.

London-based Capital Economics is among those also predicting an economic shock.

“The rapid escalation of measures to contain the coronavirus outbreak suggests that the economic damage will be even larger than we anticipated only a few days ago, and we are now pencilling in a 10 percent annualized decline in GDP in the second quarter,” Hunter said in a March 18 report.

“For now we expect activity to begin to rebound over the second half of the year, but that will depend on the virus being brought under control over the next few months and on Congress stepping up to the plate with a substantial fiscal response.”

He added: “Assuming the spread of the virus eventually slows and containment policies are eased, we expect the economy to begin to recover later this year.

“But it could take some time for output to return to its previous trend. If an extended shutdown of parts of the economy results in significant job losses, business closures and a collapse in confidence, the coronavirus outbreak could deal lasting damage to the economy.”

For a retail sector already facing headwinds, the coronavirus crisis could not have come at a worse time. Avoiding lasting wreckage will be the focus of policymakers as the United States – and the world – attempts to combat an economically lethal pandemic.

Image: An empty store is seen near Times Square following the outbreak of the coronavirus disease (COVID-19), in New York City, U.S., March 18, 2020. REUTERS/Jeenah Moon TPX IMAGES OF THE DAY.