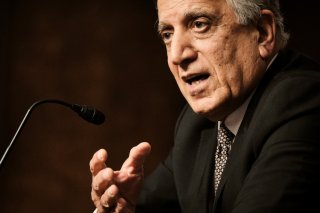 Zalmay Khalilzad, a former U.S. ambassador to Iraq and Afghanistan who headed the Trump-era negotiations with the Taliban, has stepped down as the U.S. Special Envoy to Afghanistan. A keen foreign policy thinker, Khalilzad has enjoyed a distinguished career in government.

In his resignation, which took effect on Tuesday, Khalilzad did not offer any substantive cause, suggesting instead that events in Afghanistan had led the United States to enter “a new phase in our Afghanistan policy.”

“I decided that now is the right time,” Khalilzad said in his resignation letter, addressed to Secretary of State Antony Blinken. Blinken later acknowledged Khalilzad’s resignation in a statement, thanking him for his service and appointing Thomas West, his deputy, to his former position.

Khalilzad’s departure from the State Department comes two months after the Taliban's capture of Afghanistan, in part due to the U.S. withdrawal under the February 2020 peace agreement that Khalilzad helped to negotiate.

For this, Khalilzad has been the target of criticism from both the political left and right, as well as from some within the Biden administration itself. For his part, however, Khalilzad has privately noted that he had recommended departing from the agreement after it was clear that the Taliban had begun to violate it, according to the Washington Post. The group has maintained its ties to Al Qaeda and has appointed Sirajuddin Haqqani, a member of the Al Qaeda-aligned Haqqani network with a $5 million U.S. bounty, to the position of Interior Minister.

Khalilzad, a native of Afghanistan who later became a university professor in the United States, has been the government’s pre-eminent Afghan expert for decades. He later advised the Carter administration on aid to Afghanistan’s mujahideen rebels in their fight against the Soviet Union and served in the administration of George H.W. Bush as Deputy Undersecretary of Defense for Policy Planning.

After a stint at the RAND Corporation during the 1990s, Khalilzad became President George W. Bush’s Special Presidential Envoy for Afghanistan after the 9/11 attacks. In this role, he advised Bush and Afghan President Hamid Karzai, becoming the U.S. ambassador to Afghanistan in 2003, Iraq in 2005, and the United Nations in 2007.

After spending the Obama presidency out of government, Khalilzad returned to the Trump administration as Special Envoy for Afghanistan and leader of the U.S.-Taliban negotiations in 2018. He remained in this role during the early months of the Biden presidency, helping to oversee the chaotic U.S. evacuation and prevent further bloodshed by the Taliban.

Khalilzad has indicated that he intends to remain active in public life, and will soon share his thoughts regarding the withdrawal decision.