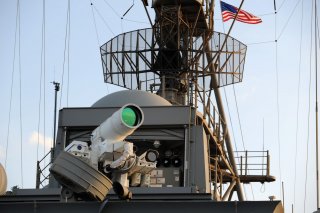 The Navy is “power-scaling” lasers with additional strength, range and electrical power to expand the mission scope and targeting options for the weapons, with the goal of enabling laser-armed destroyers and amphibs to track and incinerate advanced targets.

Navy scientists and weapons developers have been working on electronics and fiber optics to engineer lasers capable of destroying incoming cruise missiles, helicopters and perhaps even ballistic missiles. In addition, combining high-power laser beams can also introduce the promise of destroying multiple incoming attacks at one time. Laser weapons demonstrated an ability to destroy drones years ago.

Booz Allen Hamilton has been one of several key vendors working on Navy development and engineering contracts to strengthen and improve laser weapons. Lasers have progressed quickly, and the Navy is already arming destroyers; BAH is working on technical methods of increasing high-power input to propel 100-kilowatt lasers.

“To destroy a cruise missile it takes higher power settings, longer range attack and different types of lasers. Power levels are going up with the ability to meaningfully engage. We are doing the necessary lethality investigation. What does it take to actually kill a target?” David Stoudt—Senior Executive Advisor, Booz Allen Hamilton, Engineering Fellow, Directed Energy, told Warrior Maven in an interview.

Laser weapons can not only incinerate enemy targets but also surveil, track and target attacking platforms as well. While new weapons such as ODIN and HELIOS (High Energy Laser with Integrated Optical-Dazzler and Surveillance system) are emerging lasers engineered with advanced technology for current and future applications, the Navy deployed its Laser Weapons System, or LAWs on the USS Ponce many years ago. The Navy’s Optical Dazzling Interdictor, or ODIN laser weapon, was installed on the USS Dewey guided missile destroyer recently, a report from Naval Sea Systems Command said earlier this year. Integration on the USS Dewey is the first time lasers have been brought into Navy destroyers.

Now, the Navy has armed an amphibious assault ship with lasers as well, according to an interesting report from Seapower magazine.  The Amphibious Transport Dock, the USS Portland, “disabled an unmanned aerial vehicle with a Solid State Laser Technology Maturation Laser Weapon System Demonstrator Mk2, Mod 0,” the Seapower report states.

The ODIN is, among other things, specifically configured to track and disable enemy drones, throwing them off course and jamming its sensors, according to a December, 2019, Congressional Research Service report called Navy Lasers, Railgun, and Gun-Launched Guided Projectile:

“The weapon will also feed intelligence, surveillance and reconnaissance (ISR) data into the ship’s combat system and provide a counter-UAS (C-UAS) ISR dazzler capability. The dazzler uses a lower power setting to confuse or reduce ISR capabilities of a hostile UAS,” the report states, in reference to the Navy’s ODIN…. ]and HELIOS.

Optical fibers, Stoudt explained, have a lot of high quality light and very strong beam quality. “We have the means to combine many of those fibers into a single coherent output. Power drives the diode and the diode drives the fiber amplifier. The electric circuit drives the diode laser itself,” Stoudt said. “We are evaluating atmospheric effects and propagation effects, combining laser diodes and fiber amplifiers together. We are increasing the weight, the heat and the volume. Then you have to add thermal management systems.”