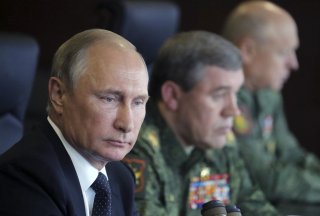 Russia and its partners are laying the groundwork for the massive ZAPAD 2021 series of military exercises that will be held later this year.

The Belarusian defense ministry announced earlier this week that a united Russia-Belarus military command will hold joint staff exercises. “On February 8-12, representatives of the armed forces of Belarus and Russia in the united command will practice measures at stationary command posts to use one of the options of employing the grouping of forces (troops) in an operation of the regional group of forces (troops),” read the Defense Ministry’s press statement.

As with the Baltic Fleet’s recent military preparedness drills, these exercises are paving the way for the ZAPAD 2021 event in September 2021, an ambitious set of joint drills and wargames involving Russia’s Western Military District and Belarus’ Armed Forces. ZAPAD—Russian for “west”—is the western component of Russia’s four main regional exercises, held annually in rotating fashion: that is, VOSTOK 2018 (East), and TSENTR 2019 (Center), KAVKAZ 2020 (Caucasus), and now ZAPAD 2021. The full extent of the Zapad 2021 exercises, which will be concentrated in the Moscow, Bryansk, Smolensk, and Kursk districts on Russia’s western flank and in Russia’s central European enclave of Kaliningrad, is yet to be determined. There will be a significant air and missile defense component, foreshadowed by a slew of Russian and Belarusian anti-air drills in late January and confirmed by a recent Western Military District statement: “The ZAPAD 2021 drills will focus on combating cruise missiles and unmanned aerial vehicles.” The exercises will also reportedly focus on more unconventional battlefield tools, including electronic countermeasures (ECM) and reconnaissance drills. According to Moscow and Minsk, the drills are meant to simulate an escalating military conflict with a notional state.

The previous round of ZAPAD exercises, held in 2017, drew around thirteen thousand Russian and Belarusian military personnel and involved a wide range of armored, naval, and aerial units. As per Russia’s reported numbers, the drills featured 70 aircraft and 680 pieces of military hardware, including 250 tanks and hundreds more rocket/artillery pieces. The 2017 exercises prompted swift condemnation from the North Atlantic Treaty Organization, along with allegations that the Kremlin underreported the scale of the exercise and failed to withdraw some portion of its participating troops from Belarusian territory. Later in 2017, Poland organized a series of joint NATO counter-exercises along with Russian adversaries Ukraine and Georgia.

The latest round of ZAPAD 2021, held on the heels of civil unrest in Belarus and rising military tensions in the broader Baltic region, is shaping up to be similarly controversial. The drills will likely be a major milestone in the ongoing process of Russian-Belarusian military integration, further catalyzed by the wave of protests in 2020 aimed at deposing Belarus’s President Alexander Lukashenko. Russia, which operates several military bases on Belarusian territory and shares a partially overlapping missile defense infrastructure with Minsk, upped its military presence in and around Belarus shortly following the onset of anti-government demonstrations in Belarus. Lukashenko has consistently stressed the inviolability of defense ties between Russia and Belarus: “we can quarrel and argue about any matters but we've never argued and have never been in doubt about defense and security,” he said in a 2020 meeting with Russia’s President Vladimir Putin. “We will make plans for army exercises for years ahead and we are going to specify them. We should stage small exercises and big ones together.”