ZBD-03: The Infantry Fighting Vehicle that Could be Used to Invade Taiwan 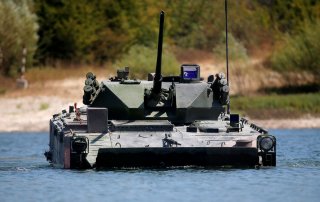 Although we don’t know for certain what spark will ignite the South China Sea, what can be more confidently deduced is what an assault on the contested Dongsha Islands—or on Taiwan itself might look like.

As I’ve previously written, an amphibious assault by the People’s Liberation Army Navy and Marine Corps would likely include the fast and capable Type 05 amphibious assault vehicle (roughly analogous to the USMC AAV), and could be followed by China’s other amphibious vehicle, the Type 08. It is possible that an assault from the sea would also be complimented by an attack from the air—by parachute.

Once on the ground, air-delivered paratroopers would need support on the ground—and more firepower than small arms could provide. And what would provide this? The ZBD-03.

As the ZBD-03 is intended to be air-transportable, a premium was placed on weight savings. To that end the ZBD-03 body makes use of aluminum alloys, which are lighter than an all-steel construction. As a result, the ZBD-03 is less protected and, like the BMP family of infantry fighting vehicles, features a steeply-sloped front hull glacis in order to better deflect incoming rounds when possible and resist hull penetration. Consequently, the ZBD-03 has a modest eight-ton footprint and is relatively transportable. Interestingly, it dwarfs the BMP-2 in size, yet weighs nearly 3.5 tons less.

Though compromises were made to the ZBD-03 platform in regard to armor protection, the ZBD-03’s main gun makes no effort at compromise. A large 30-millimeter main gun tops the turret. The large-caliber gun is capable of firing armor-piercing rounds and could likely inflict significant damage to most targets, though heavily armored main battle tanks could be an exception. Complimenting the 30-millimeter main gun is a standard .30 caliber general purpose machine gun.

In addition to the gunner, commander, and driver the ZBD-03 can carry up five fully-equipped infantry troops in a rear armored compartment. Infantry can egress via a larger rear hatch, or two smaller roof hatches.

In the event of an attempted takeover of any of the islands that are disputed by China and Taiwan—or indeed an attempted assault on Taiwan itself, the ZBD-03 would play an important role to the People’s Liberation Army, though questions about the platform’s ability to survive a high-intensity conflict remain.