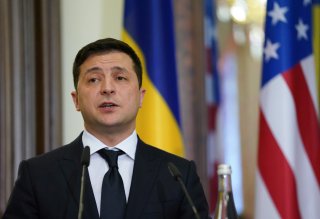 Ukrainian president Volodymyr Zelensky said on Monday that Ukraine would take whatever steps it considered necessary to defend its territory, although he stressed that a broader military conflict would be avoided at all costs.

“We are committed to the peaceful and diplomatic path,” Zelensky said in his remarks, according to Reuters. “But we are on our own land … We are not afraid of anything and anybody, we owe nothing to no one, and we will give nothing to no one.”

Officials in Kyiv have scrambled to respond to Putin’s decision on Monday to recognize the two separatist territories in Ukraine’s eastern Donbass region—the Donetsk People’s Republic and the Luhansk People’s Republic—as independent nations.

The Kremlin’s recognition is a violation of the Minsk Protocol, a set of guidelines agreed on in 2014 and 2015 as a way to end Ukraine’s bitter eight-year internal conflict. Russia has championed the Minsk settlement as a roadmap to peace in the past. Just this past Sunday, Anatoly Antonov, Russia’s ambassador to the United States, said that “Donetsk and Luhansk are part of Ukraine” due to the Minsk Protocol.

In addition to its recognition of the two separatist regions, Russia has committed to deploying “peacekeeping” forces into both regions, nominally to quell the ongoing violence between the separatists and the Ukrainian military. Because each separatist region controls less than half of the territory it claims as its own, some officials have warned that Russian troops could take aggressive steps in order to restore the two regions’ “rightful” borders, possibly leading to a wider war between Kyiv and Moscow.

At a meeting of the United Nations on Monday night, Ambassador Linda Thomas-Greenfield derided Putin for calling Russian troops “peacekeepers” rather than invading occupiers. “He calls them peacekeepers,” Thomas-Greenfield said. “This is nonsense. We know what they really are.”

To push back against Russia’s decision, Zelensky called for an emergency meeting between Ukrainian, German, French, and Russian officials to discuss the recognition and deployment.

“We expect clear and effective steps of support from our partners,” the president said, adding that it would be seen in the coming weeks which nations were willing to take effective action against Russia and which were not.